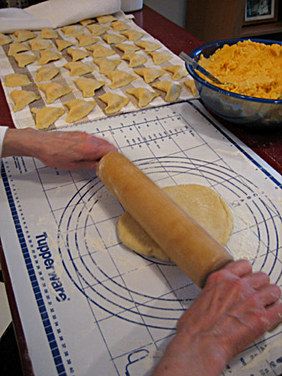 Thank goodness we still know how to make perogies just as grandma and great-grandma Eva used to.

This recipe bears some hallmarks of grandma's time, married as she was at the very end of the 1940s. The dough incorporates margarine, which hit Canadian shelves in 1948 and was touted as a healthier alternative to butter (we know better now), and the use of reserved potato water (which she also used for making soups) speaks to the kind of frugality the Great Depression had necessitated.

For me this is a classic perogy: a soft, tender dough filled with a comforting mash of potatoes and bright-orange cheddar cheese (another nod to newfangled post-War ingredients) blanketed in onions slowly fried and topped with a little pouf of sour cream.

Perogies tend not to be a small-batch affair. When the family made them back in the day, a gang got together worked morning til night churning out a winter's supply with a variety of fillings ~ sour cherries and cottage cheese offered alternatives to the standard potato-cheese. This recipe also makes quite a lot, so enlist some help and plan to freeze small batches dressed in fried onions for quick dinners or snacks when labour beyond turning on a stove burner is out of the question.

For the dough:
8 cups unbleached, all-purpose flour
1 tablespoon salt
3/4 cups margarine
3 eggs
3 cups potato water (reserved from making filling; you might not need all of it)

1. Make the garnish: Heat canola oil over medium heat in a large skillet. Add onions and fry slowly until they are very soft and just begin to caramelize, taking on a deep golden color. Reserve. (Also reserve the yogurt or sour cream separately until ready to serve.)

2. Make the filling: Bring a large pot of water to the boil; add the salt and cubed potatoes. Cook until potatoes are tender, approximately 20 minutes. Drain potatoes well (reserving 3 cups of the cooking water) and return them to the pot. Mash until they are very smooth (if potatoes are dry, you can add up to 1/2 cup of milk to achieve proper consistency). Add the grated cheese to the mashed potatoes and stir until it has melted and is well blended. Let filling cool to room temperature before stuffing the dough.

3. Make the dough: Stir together flour and salt in a large mixing bowl. Cut in margarine until dough comes together, resembling dried peas. Beat eggs together in a measuring cup and fill with potato water to measure 1 cup. Add the egg mixture to the dough and stir until dough comes together. Turn dough out onto a lightly floured surface and knead until it is smooth and pliable, adding more flour if dough is too soft and more potato water if it is too dry. After kneading, let dough rest, covered, for 1 hour.

4. Assemble perogies: Cut dough into six pieces, keeping unused pieces covered so dough does not dry out. On a lightly floured surface, roll a piece of dough out into a thin sheet, approximately 1/8-inch thick. Cut dough into 2-inch squares or rounds. Place 1 tablespoon filling in the center of each square. Fold square into a triangle, pinching edges together firmly around the filling. Lay finished perogies on a tray covered with a tea towel until cooking time. Repeat with remaining 5 pieces of dough.

5. Cook perogies: Bring a large pot of water to the boil and slide in perogies, several at a time, cooking them until the skins start to blister slightly and they float to the surface of the water. Remove perogies from boiling water with a slotted spoon, draining them well. Toss perogies with fried onions and top each serving with a dollop of plain yogurt or sour cream. (You can also fry the boiled perogies in a little bit of canola oil until the skin starts to crisp and brown before adding garnish.)