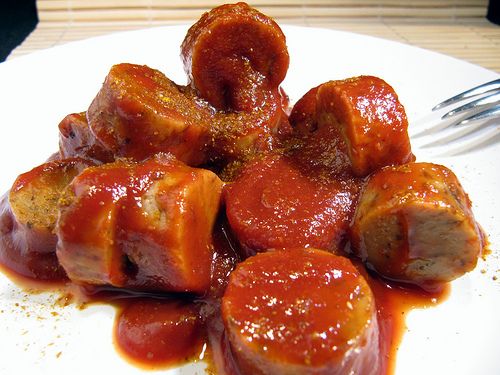 Such a typical Uruguayan dish that can be eaten at any bar or fast-food store, and each place has its unique way of preparing it. This sandwich was created just by chance by a cook in Punta del Este City when once a client asked for a chivito(which means that had to be made with goat meat -chivito=young goat). There was no goat meat at that restaurant so the cook prepared it with beef instead. He sandwiched a beefsteak with ham, cheese, lettuce, tomato and mayonnaise. Thus was the chivito born, so popular nowadays. And yet, such an easy dish is never made at home. Now I suggest you prepare it the classic way but with a touch of your own.

The Currywurst or curried sausage is a main dish –best for accompanying a soccer match, a beer, a barbeque or any other outside event. It has also firmly established its place even at embassy receptions. The Currywurst has been adapted by many other countries. Story: The Currywurst was invented by Herta Heuwer in 1949 in Berlin. In 2009 the first and only German Currywurst Museum® opened up in Berlin. They highlight the fact that „in Germany, about 800 million portions of Currywurst are consumed per year – with 70 million Currywürste p.a. eaten in Berlin alone.“ Incredible. Drinks that go well with Currywurst: Wheat beer (available also alcohol-free) Other kinds of beer (except sweet beer)

Belarus is a "potato land". That is a common feature of the Belarusian and the Dutch cousine. Many traditional dishes are made with potatoes. Draniki, however, are all-time best and everybody's favourite. They can be served as a main course, or as a side dish. The recipe is very simple, yet every cook has its own variations, proportions and secrets. Here is my recipe.

Adobo is widely considered to be the national dish of the Philippines. It consists of meats, seafood or vegetables braised in vinegar, salt and garlic. Adobo is simple to prepare and tastes even more flavorful a few days after it is made. It is best eaten with steaming hot rice. There are as many variations of adobo as there are cooks. This version is mildly spiced and uses coconut milk to thicken and enrich the sauce.

One of the traditional Ukrainian dishes - Apple Baba (Tart). It's full of apples, simple and delicious, just pure joy.

The recipe is meant to serve as a guideline but allows for great flexibility. Use what you have on hand, all the ingredients are very common ones in Spanish kitchens. Gazpacho can be adapted to dietary restrictions. Omit the vinegar, for those who don't like anything too acidic, or the garlic, or make without the bread to be gluten-free. If made without bread and not too much oil it is a very healthy and light soup. This is a real Summer soup, when the tomatoes are at their best. Make a big jug of gazpacho and place in the fridge and you can survive a hot Summer on it.

Chicken tagine with Preserved Lemons and Olives is a classic Moroccan dish, popular as both a family meal and company dinner. This recipe is for conventional stove top preparation.

Potica is probably the most well known Slovenian dessert. It is a reflection and result of a variety of events and influences on our territory during the centuries of historical development. There is a rich palette of diversity: different types of dough and stuffing and different methods of making it. It is traditionally served at Easter and Christmas, as well as other celebrations or holidays. The name “potica” comes from the method of preparation of this dessert: flattened dough is greased with a stuffing and then wrapped. Stuffing is made from the best ingredients, such as nuts, honey, raisins, cracklings, cream, poppy, cheese, chocolate and many others. The most typical potica is made with tarragon, but the most popular and widespread is the one with nuts (“orehova potica”, eng. nut roll). There is an unwritten rule that the knowledge how to make and bake the nut potica shows that the person is a good cook, which is why future brides are often asked whether they know how to bake one.

In this recipe you can use Chicken, Pork or Beef. The Green Sauce of the Jocón is popular in the highlands of Guatemala

This is the traditional Guacamole recipe, but there is another version from the north of Mexico in which you add small cubes of tomato shells.

Quetschentaart is one of the classics of Luxembourgish baking. The simple fruit tart is a traditional autumn treat, and you’ll find it at bakeries across the country at this time of year. Plum tart is made with “Quetschen”, which translates into plum, but it’s not really exactly the same. Most of you will probably think of a plum as a round, dark reddish fruit, with a little round stone in the middle. While that’s perfectly correct, it’s not quite what we have in Luxembourg. Luxembourgish plums have a slightly elongated shape, they’re darker, almost deep purple, and they have a long, thin stone. They are what the British call damson plums, and unfortunately, they are quite hard to track down so you can also use plain, round, reddish plums.

This is a traditional Scottish soup from Cullen, a small coastal town near Aberdeen. It relies on good smoked haddock, preferably undyed.

This is a thick soup. If you want to make it thinner you can add extra sea food broth.
Flavors around the world. Recipes collected from spouses of Ambassadors in The Hague by March 2016. ASA - Ambassadors Spouses Association

Thank you for your interest in Midena's cookbook and for helping support the BakeSpace community of independent cookbook authors!

Flavors around the world. Recipes collected from spouses of Ambassadors in The Hague by March 2016. ASA - Ambassadors Spouses Association