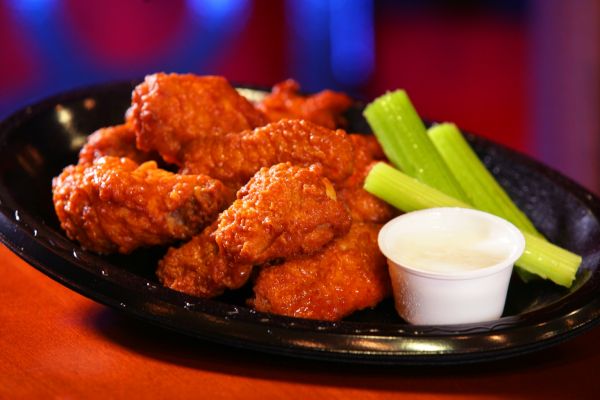 HalFire: A Passion for HotWings!

About The Ingredients In This Cookbook:

In the first days of wing making, we used to measure 1/8 teaspoons of multiple spices to get the right level of flavor in our wing sauce. It didn’t take long to figure out that pre-mixing the spices would lead to easier and faster cooking. We are proud to share the secret recipe of herbs and spices that yields unequaled flavor in our mixtures.

About The Ingredients In This Cookbook:

This is the ideal sauce for a novice wing eater. No experience required to try this recipe.

This is a mild recipe that won't upset Dante's ulcers.

The recipe that gave birth to Wingazette® Magazine in July of 1990 (www.wingazette.com). Hotter Than Hal wings remain a favorite when you don’t have time to cook your wing sauce. WARNING: THIS RECIPE NOT FOR THE WEAK OF STOMACH

One of the recipes that started it all! Appearing in the first issue of Wingazette® Magazine, Turner's Burners has stood the test of time. This was our first recipe that called for cooking the wing sauce. Use extreme caution during and after consumption. Do not touch any mucous membranes for a 24 hour period after eating this recipe. WARNING! THIS RECIPE IS NOT FOR THE WEAK OF STOMACH! PROFESSIONAL WING EATERS ONLY!

The peak of excitement in wing eating, Turner’s Torchers were developed to celebrate the announcement of the Olympic Games for Atlanta in 1996.

We revised this recipe in August 2011, after we suffered a very thin, runny sauce. We actually simplified the recipe and removed some of the butter fat. This recipe comes from the Food Network, but it does not appear on their website. Pat Neely said during the episode that he never gives this recipe out… so we felt lucky to get it.

This recipe was discovered over the Christmas holidays in 2011. The level of pain can be adjusted with additional drops of the Ghost Pepper sauce. To quote from the bottle..."more than one drop...Ghost Pepper...is suicide." This recipe uses 5 drops - not for the faint of heart or novice wing eater - this one is for "seasoned" pros. In 2007, Guinness World Records certified the Bhut Jolokia as the world's hottest chili pepper, 401.5 times hotter than Tabasco sauce. Since then, the Infinity chilli, Naga Viper pepper, and the Trinidad Scorpion Butch T pepper have surpassed the Bhut Jolokia's Scoville rating.

This recipe represents a major breakthrough for diabetics who want to enjoy good Buffalo Wings! A ten piece order of Buffalo wings and a good size portion of fries and celery and dressing that fits a diabetic meal plan! OK, we won’t kid you – removing the skin from the wings is a LOT of work, and could be done well in advance of the meal for planning purposes. The end result of the recipe is about 4 ounces of lean white meat. The fries represent 3 carb allowances or about 45 grams of carbohydrate – ideal for our meal plan. The celery and dressing have miniscule amounts of carbs – we use a low-fat, low-carb ranch or blue cheese. The bottom line is that now we can have wings whenever we feel the urge without having to worry about high blood sugar as an after-effect! It is very important to use particular brand names for the recipe, or all bets are off on the nutritional info. Wing Time® Super Hot Buffalo Wing Sauce is the only sauce for this recipe, but we would probably allow any other Wing Time® flavor. This terrific tasting sauce is available via their website, and is low in fat – only ½ gram saturated! There are no trans fats in Wing Time® Buffalo Wing Sauce. The real reason for using it – you’ll probably never taste a better sauce that comes straight out of the bottle. Alexia™ Gourmet Quality Yukon Gold Julienne Fries with Sea Salt are the only allowable fries. These fries are cooked in trans-fat-free vegetable oils, and have no saturated fat at all. The Sea Salt keeps the sodium level down, and following the cooking directions yields a crisp, flavorful fry.

The perfect fire extinguisher for the previously listed wing recipes, Hal’s Ultra-Blue is praised for its simplicity as well as its flavor.
I've had a passion for Buffalo style chicken wings for over 20 years. During that time, I've experimented with many different ingredients in creating the best tasting recipes imaginable. This cookbook is a prelude to a much larger work to be released later.

Thank you for your interest in hturner3's cookbook and for helping support the BakeSpace community of independent cookbook authors!

HalFire: A Passion for HotWings!

I've had a passion for Buffalo style chicken wings for over 20 years. During that time, I've experimented with many different ingredients in creating the best tasting recipes imaginable. This cookbook is a prelude to a much larger work to be released later.