"Baked” apple made in the microwave 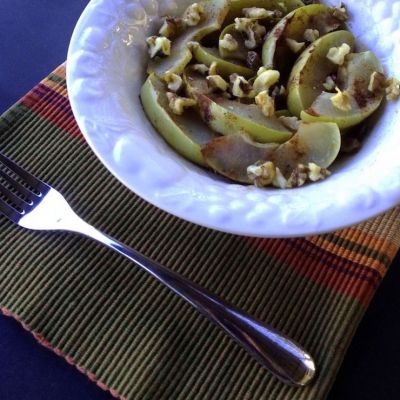 Baked apples are a Fall staple. Their smell alone is enough to give you that “It’s definitely Fall” feeling. It’s one of those things we crave but never get around to making, because it’s assumed to be something you make for a crowd on a special occasion. Thanks to the almighty microwave, that doesn’t have to be the case.

I actually came up with this dessert when I was living in the dorms at UCLA. My only cooking tool was a microwave, which I would often make oatmeal in. Subsequently, I kept around my favorite oatmeal add-ins: apples, dried fruit, nuts, spices, and sweeteners like honey or maple syrup. One night I experimented by combining these items and seeing if I could make a “baked” apple in the microwave, and it worked! From then on it was my go-to for an easy warm dessert when the weather or my mood called for it. I also realized later on that it’s extremely versatile, and came up with several variations (see end of post).

Also, I’m using this recipe as a way to share what I believe is the easiest and best way to cut an apple. Enjoy!

With a large knife, slice the apple in half right down the middle, then scoop out the core on each half using a melon baller. Then, using the tip of your knife, cut out the inedible parts on each apple half. Cut each half into wedge slices, and it’s ready to bake.

In a microwave-safe bowl, toss the apple slices with the lemon juice, spices, brown sugar, vanilla and raisins.

Cover the bowl with an upside-down plate. Microwave for 3 minutes, then remove it using a towel or oven glove (watch out, the bowl and plate will be HOT). Add the walnuts and drizzle the maple syrup on top.