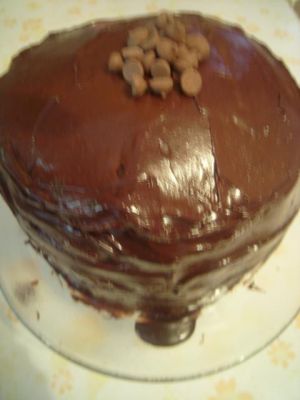 One of my bestest friends in the whole world moved 5 hours away. I felt like I was in grade 6 - or maybe like I had lost a limb. Either way, it was awful. This was the 7th cake in my cake year challenge, and this friend was the reason these weird challenges even existed in the first place! So I knew that while she'd be around for every 6th weekend or so, it would never be the same and I should really send her off with a serious cake. Enter the 10 Layer Smell You Later Cake. I honestly have no idea how it even stood up on it's own, but it did. Well, it had help from the buttercream.

Preheat oven to 350. Grease and flour 10 9-inch aluminum round pans.

Cream the sugar and butter. Add eggs one at a time, beat until smooth.

Sift together flour, salt and baking powder. Mix into egg mixture one cup at a time. With mixer running, slowly pour in the evaporated milk, then the vanilla and water. Mix just combined. Put three big spoonfuls of batter in each pan, tap on counter to spread evenly. Bake three layers at a time on the middle rack of the oven for about 5-8 minutes (watch them!).

The original recipe included a recipe for icing, but I found it to be too runny and it didn't look as pretty as Bakerella's suggestion of chocolate buttercream. I have learned in the past, just trust Bakerella!

Prepare your buttercream by creaming the butter and the shortening, then add vanilla and cocoa. Gradually add the sugar, one cup at a time, then slowly add the milk.

To assemble the cake, frost the top of each layer so the next will stick to it. When you have a serious tower of cakes, frost the top and sides, doing your best to keep the layes hidden under a thick coating of frosting. This way when it's cut into, it's a huge surprise to everyone who sees it!