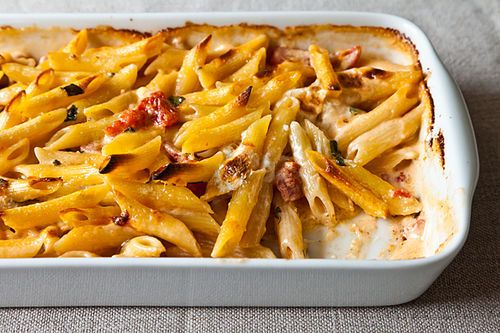 You won't meet a speedier baked pasta, not one that's this good. The recipe as written is genius, but even more genius is the fact that the technique can be reapplied in countless ways. Al Forno is always cycling in seasonal variations: thinly sliced asparagus and lemon zest, radicchio and shiitake, pumpkin and pancetta (the last of which Merrill reverse engineered and posted on FOOD52 back in 2010 -- go save her recipe now to try next fall). You also don't need to go out and buy five different hunks of cheese. This technique can work with whatever forgotten ends you have lying in the cheese drawer. Adapted very slightly from Cucina Simpatica: Robust Trattoria Cooking by Johanne Killeen & George Germon (Harper Collins, 1991)

Bring a large pot of salted water to a boil.

In a mixing bowl, combine all ingredients except the pasta and butter. Stir well to combine.

Drop the pasta into the boiling water and parboil for 4 minutes. Drain in a colander and add to the ingredients in the mixing bowl, tossing to combine.

Divide the pasta mixture among six to eight shallow ceramic gratin dishes (1 1/2 to 2 cups in capacity) or place in a shallow (1-inch) layer in larger baking dishes. Dot with the butter, and bake until bubbly and brown on top, 7 to 10 minutes.