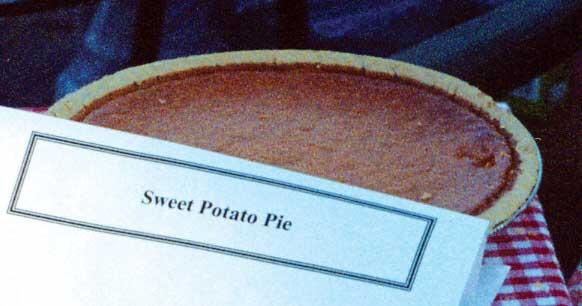 The sweet potato is a common name applied to a perennial, trailing herb, belonging to the morning glory family. The plant native to the American tropics is cultivated on sandy or loamy soil and exists as an important food staple in the Southern United States. After harvesting, the root tubers are allowed to dry in the sun and then store under conditions of dry atmosphere and uniform temperatures.

Martha Ann Horton Stapler recounts the background to her sweet potato pie."As far back as five generations, my family has been storing them in a 'hill,' by making a bed of pine straw, piling the potatoes on the straw, and covering them with more pine straw. They then made a teepee of dried corn stalks and covered this with a thick layer of dirt. This kept the potatoes from freezing in the winter. By spring, if there were any potatoes left in the hill, these would be used for slips for the next year's crop."

"Sweet potato pie has always been a traditional dish for thanksgiving for my family. The recipe has been altered over the years. My grandmother made the pie starting with a homemade crust. This she made with shortening and water. The filling was made with sweet potatoes, sugar, butter, and vanilla flavoring. My mother added nutmeg to the filling. I do not like nutmeg, so I dropped that from her recipe and I add shredded coconut."

"Because of the fast pace of living, I now buy my pie crust from the super market. I still serve potato pie or as some call it potato custard at Thanksgiving. It is very good served as a desert, or it can be served with roast pork as a vegetable."

Annell Linsey's family almost always ate sweet potato pie for the holidays, along with other baked goods like pecan pie. as a child, her family raised an acre of sweet potatoes, saving some in a "hill" for the family to eat throughout the winter and selling the rest. they dug the potatoes in September and spread them out to dry. The first dug potatoes were usually called "green" potatoes, but they would become sweeter after the first month or so.

Mrs. Linsey began helping her mother in the kitchen when she was a child. She cannot remember exactly where she learned this recipe--it has been passed down through her family--but she has added her own special touches. First, she prefers not to put the potatoes in an electric mixer, as some cooks do today, but rather to mash them by hand with a potato masher. Second, she adds a little vanilla and lemon, mostly because she likes these flavors.