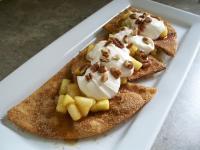 1. Heat oil until it "speaks" when you sprinkle water into it. Cut each tortilla in half, then cut each half into 4 wedges.

2. Mix cinnamon and sugar in a shallow dish with another paper towel lined dish right next to it.

3. Put 2-4 tortilla wedges into the hot oil and cook until light brown on each side, flipping only once (this should take about 1 minute). Remove immediately from oil one by one and completely cover in cinnamon sugar mixture on both sides before placing on towel lined dish to cool and drain.

4. When finished with crispas, toss together diced apples and lemon juice.

5. Put apples, lemon juice and amaretto into a medium-sized skillet and cook over medium heat until apples just start to get tender and barely break down.

9. On a plate or platter, set out each crispa individually. Top with a teaspoon or more of apple mixture, then a dollop of whipped cream. Sprinkle with chopped pecans.