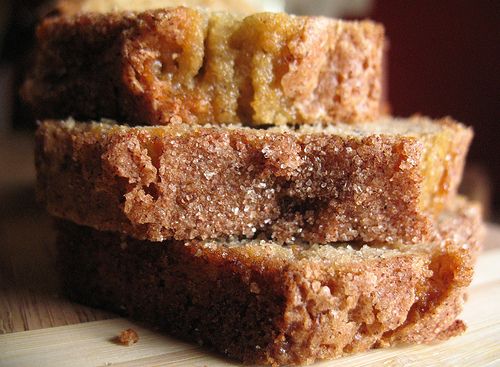 This has to be one of my all time favorites! It's my Great Aunt Rosie's banana bread that I've tweeked just a little bit. Growing up this was how we always used up the bananas that didn't get eaten up fast enough.

I've added a cinnamon sugar sprinkle on top before baking and it forms an almost brulee topping that is oh so yummy!! I've been known to pick it off before eating the bread itself.

If making your own buttermilk put 1/2 tbsp vinegar in 1/2 cup measuring cup and fill the rest of the way with milk, set aside.

Cream together butter and sugar.

Add in banana, egg, and vanilla and mix until combined.

Add half of dry ingredients and mix and then half of milk and mix. do the same with the other half of dry and wet. do not overmix.

This can be made into 4 mini loafs, 1 large loaf, or approx 20 muffins.

Sprinkle top of loafs or muffins generously with cinnamon sugar topping before baking.

belledonne33
After countless attempts to make the "perfect" banana bread, and after researching many recipes, I'd say this one's a winner! My only comment would be in regard to the cooking time. It took my gas oven 65 minutes to cook this enough so that it was dry in the center. However, it was still moist upon eating and absolutely delicious. My other feedback would be that I ran out of cinnamon in the house so, I substituted nutmeg (less than your recipe called for) and it was delicious. Thanks again!