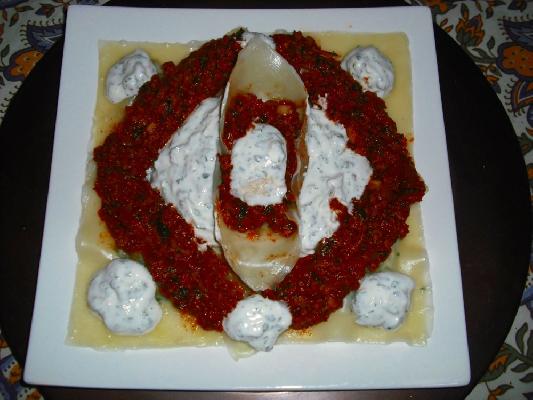 Afghan food really doesn't get a lot of attention. This is a traditional leek and scallion filled dumpling spiked with cilantro and chili pepper.

It is then served with a warm spiced meat sauce similar to a really thick Ragu alla Bolognese along with a pallette cooling chilled minted yoghurt sauce.

The Two Sauces can be made ahead of time and the dumplings can be frozen in a single layer and then stored in a freezer bag for later use. In fact, I usually end up freezing about 1/2 of the dumplings from this recipe.

Sauté the onions in olive oil until soft.

Add 1/4 a cup of water and simmer slowly until the water is reduced by half.

Stir in the tomato sauce, add salt and pepper to taste, and simmer for five more minutes.

Add water if the mix starts to look dry.

It should be as thick as a Ragù alla Bolognese (thick but not dry).

Cover and set aside in refrigerator.

The meat will absorb the flavors while resting

Combine ingredients, cover, and set aside in refrigerator.

Sauté the leeks and green onions gently in olive oil until soft but not brown. Remove from heat and add salt, pepper, cilantro and red pepper flake.

Place 1 1/2 tsp of filling on a wrapper, brush the edges of the wrapper with a thin layer of egg, fold the wrapper onto itself to form a triangle, and press firmly to seal, making sure to expell all the air or they will explode while cooking.

Set on a lightly floured baking sheet, and repeat until you run out of filling.

Keep the baking sheet covered with a tea towel over a sheet of plastic wrap to help retain moisture in the wonton wrappers.

Boil two quarts of water to a rolling boil and add 2 tsp of salt.

If you are boiling previously frozen ashrak, they will take about 5-6 minutes.

While you are boiling your aushak, reheat the meat sauce over low flame.

Drain the cooked aushak and arrange them on a warmed plate.