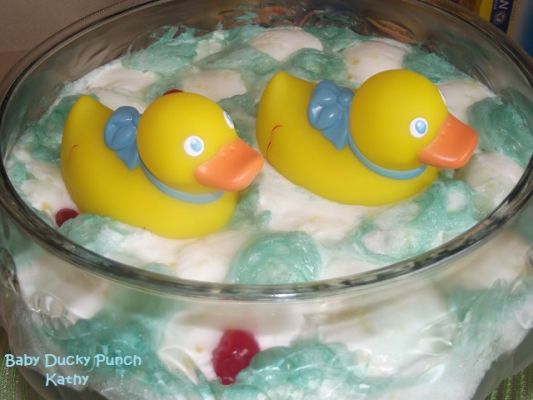 I found this recipe on Tidy Moms Blog and her picture of the punch was so blue but I have mixed emotions about the recipe! It tasted wonderful but the color of mine was greenish blue and I was disappointed about the color and I followed the recipe to a tee! After reading some readers comments, several of them had the same problem with the color! I think there is a big difference in the Ice Blue Raspberry Lemonade and the Berry Blue flavor! I have made both and the Berry Blue is a brighter blue than the Ice Blue Raspberry Lemonade and I would say that Berry Blue should be used in this recipe and not the Ice Blue Raspberry Lemonade! On her blog she mentioned that you could also use Berry Blue Typhoon Hawaiian Punch and cut out the sugar which I think would be a great way to make it! Other readers suggested using Sprite or 7-Up in place of the Ginger Ale and also using vanilla ice cream! I have posted this way of making it below the original recipe and the way I will make it next time! Next time meaning if there is another baby boy born into our family!

My niece, Felicia's, baby was born 1 week before her shower so baby Stevie was at the shower! Wouldn't you know that I was down and out with the stomach bug the weekend of the shower so I could not attend! The following weekend I invited mommy, daddy and baby over to my house for lunch and I made Cheeseburger Casserole and the Baby Ducky Punch! YAY! Everyone enjoyed the delicious punch and the casserole! He is such a cutie pie and he is such a daddy's boy!

Remove sherbet from freezer about 1/2 hour before serving punch to soften.

Add cherries on top if using.

Another way to make the punch

Replace the kool aid and sugar with 64 ounces of Berry Blue Typhoon Hawaiian Punch and use Sprite or 7-Up in place of Ginger Ale. You can also replace the pineapple sherbet with vanilla ice cream. Remember no sugar if you go with this recipe.