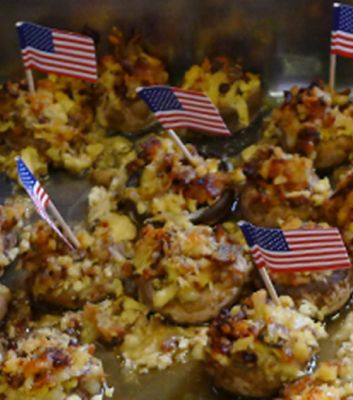 Not really a traditional "American" dish, per se, but Americans DO love bacon and cheese and so, combining those two favorites with mushrooms and baking them to a gooey-sizzle makes for an easy and tasty finger-food. Great as a appetizer, or for barbecues or other casual parties!

Submitted by: "Alison May"

Combine shredded cheeses in a bowl, retaining 1/4 cup for later.

Wipe off the mushrooms with a damp cloth, do not submerge in water as they will absorb too much and become soggy.

Fry the diced bacon until crispy and remove from pan. Drain grease, retaining 2-3 T in the pan.

Fry the diced onion in the bacon pan (in the retained bacon drippings) -- be sure to lower heat so onions don't burn.

Add the diced mushroom stems to cooking onions and continue to cook until brown.

Combine cooked bacon, onion and mushroom stems in a bowl and let cool.

Once cool, toss with large bowl of cheeses.

Add pepper -- and any other seasoning you like (dried oregano, parsley, red chili flakes, etc.)

Stuff each mushroom cap with the above mixture -- about 1-2T per mushroom, depending on size.

Place in a baking pan and sprinkle with remaining cheese.