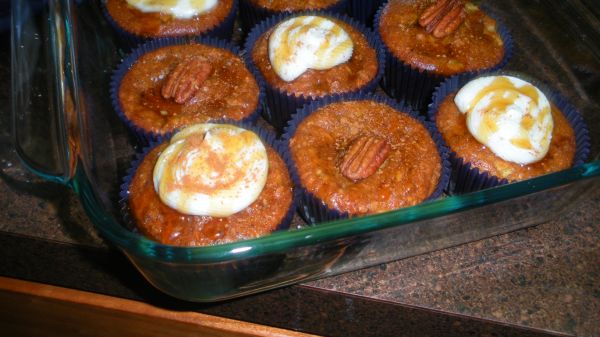 Summer is my favorite season with it's sultry flavors and sweltering temperatures, but you know, fall can be pretty savory, too.

1. Set the oven at 350º and line a one-dozen cupcake pan, sift together the flour, baking soda, cinnamon and salt.

2. Cream the sugar and earthbalance together in a bowl until combined and fluffy, roughly 3 minutes.

3. Add the soymilk/vinegar and mix until combined.

4. Blend in the apples. Add the dry ingredients in 3 parts until combined and fold in the nuts.

5. Fill the cupcake pan and bake 20-22 minutes, cupcakes will be dark brown.

Bring the water to a boil. Cook down the agave with the salt. Once it starts to bubble and get foamy, you know the water is cooking out. It will harden/thicken as it cools. After the Cake is out of the oven, drizzle liberaly in the center of each cake.

Cream the vanilla, "cheese" and "butter" together. Hand mix the sugar a little at a time to prevent dust. Add the soymilk to improve texture. Use a hand mixer to whip it to a nice even consistency. Continue to add sugar or milk til you have nice stiff peaks.

Assembly should take about 10 minutes after the cakes are cool. I like piping my icing, but it's up to you!