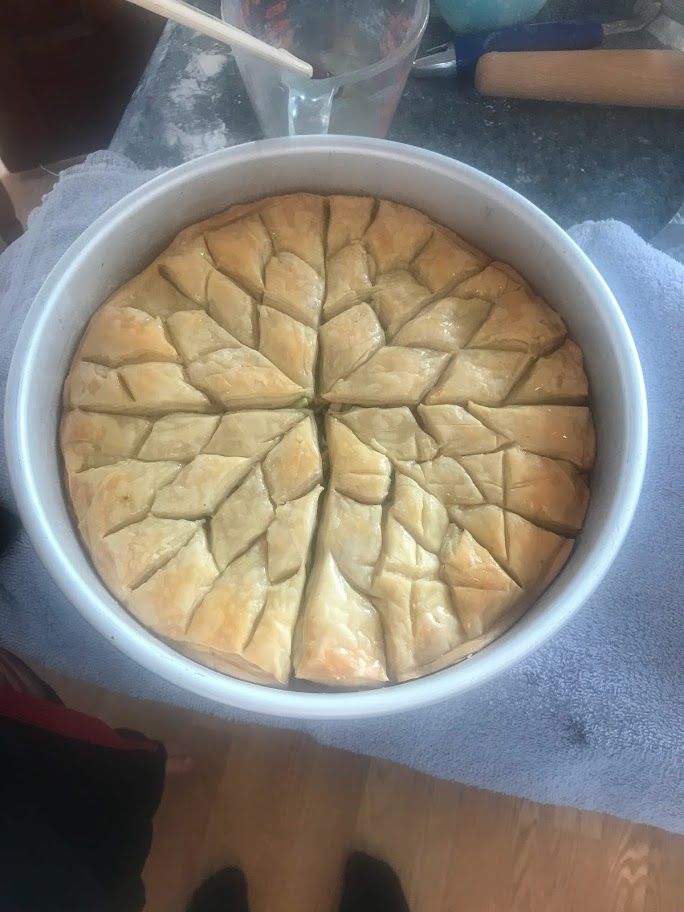 "Baklava a delicious Greek dessert which i enjoyed when i visited in September of 2021, a perfect dessert to make to impress everyone and anyone."

Baklava is a Greek dessert which is hands down one of my top three favourite deserts of all time, with the crispy filo pastry and the sweat caramelised nuts, it makes the perfect desert any time of the day any time of the year.

Step #1 Make the filo pastry. Sift the flour, baking powder and salt into a mixing bowl and make a well in the centre.

Step #2 In a separate bowl, whisk the eggs , yogurt, vegetable oil, melted butter and vinegar together until it's smooth.

Step #3 Pour the egg mixture into the flour and bring everything together to form a dough.

Ste #4 Tip the dough onto a lightly floured work surface and knead it for 10 minutes, until smooth,

Step #5 Then divide it into six pieces. Shape each piece into a ball, then place the balls on a plate or baking tray, cover them with a clean tea towel and leave them to rest for 15 minutes.

Step #6 Meanwhile, make the syrup. Place the sugar, honey and lemon slices in a pan with 200ml of water. Bring to the boil over a medium heat, stirring until the sugar dissolves. Reduce the heat and simmer for 5 minutes to infuse. Remove the syrup from the heat, pour into a heatproof jug, stir in the rosewater and leave to cool.

Step #8 Dust again with cornflour, then fold the top down to the centre and the bottom up to the centre, to give a rough square.

Step #9 Dust again with cornflour. Take each corner and fold them inwards so they meet in the middle to make a smaller square.

Step #10 Dust again with cornflour, then repeat Step 6, folding the corners into the middle again to give an even smaller square. Turn the dough over (joins underneath), cover it and leave it to rest for 15 minutes.

Step #11 Repeat with the remaining five balls of dough until you have six small squares.

Step #12 Make the filling. Mix the walnuts, pistachios, sugar, cinnamon and cardamom together in a bowl.

Step #13 To assemble, roll out one of the squares of dough to a rough 30cm-diameter circle. Using the sandwich tin as a guide, cut a neat 30cm circle, and place this in the base of the tin. Lay any trimmings evenly on top.

Step #15 Repeat this layering process with the remaining squares of dough to make three more layers of filo, placing the trimmings from the top layer of filo on top of the fifth layer, so the top of the baklava is flat without any trimmings.

Step #16 Cut the baklava into a star design (as in the photograph), slicing all the way through the layers to the base. Pour the melted butter over the top, then leave the baklava to stand for 10 minutes while the pastry absorbs the butter. Meanwhile, heat the oven to 170°C/150°C fan/325°F/Gas 3.

Step #17 Bake the baklava for 1 hour, until the top is crisp and golden. Remove the baklava from the oven. Strain the cooled syrup through a sieve, then pour the syrup over the warm baklava. Leave it to soak in for 15 minutes before removing the baklava pieces from the tin.

Step #18 To decorate, sprinkle the ground pistachios over the baklava (in a pattern, if you wish), and finish with the rose petals.

It can really just be a stand alone dish to have after dinner, or after lunch, or before lunch or when you want a snack at 2 am, or when you get home from work or school or before after or during a funeral, or as a pick me up after you stub your toe.