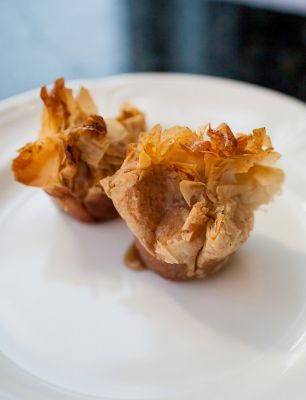 On October 9th, 2012, Tropical Foods had its Flavors of the Fall Recipe Contest with the culinary students at the Charlotte Campus of Johnson & Wales University. This recipe, Banana Split Baklava, was created by Meagan Peoples.

Cut into six equal squares and place into individual mini muffin tins; repeat this step until you have filled twenty-four mini muffin tins. Fill each muffin slot with the Banana Split® mixture.

Pinch the individual mini baklavas shut and place in the oven until golden brown, about 12 minutes. Remove from oven; drizzle with honey and sprinkle with sugar.