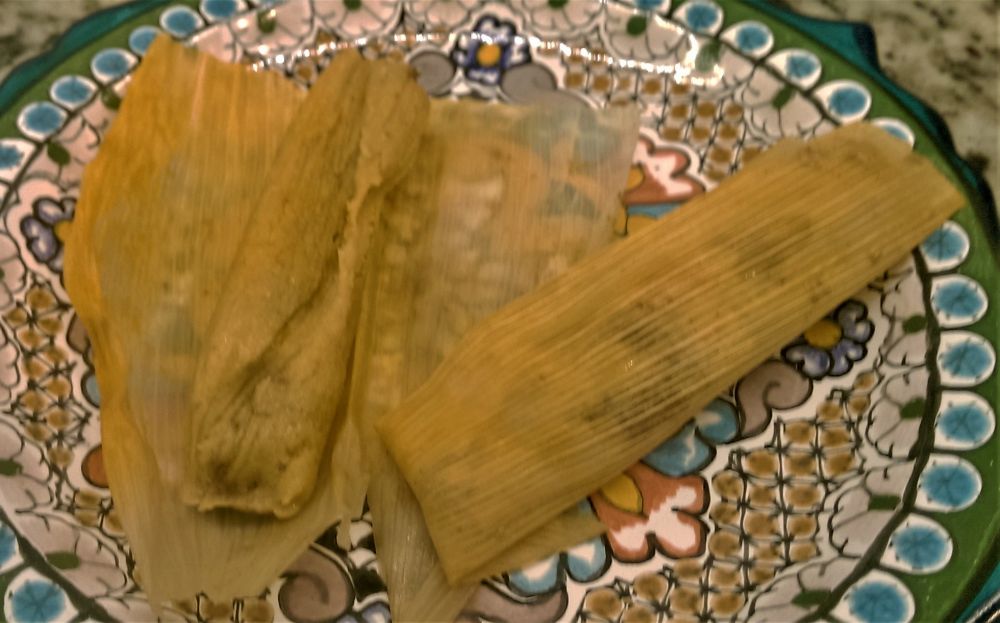 During a visit to the Old Mexico area of San Antonio, Texas I bought an authentic tamale from a Mexican food truck. I have loved tamales ever since.

For the filling
Trim away any ragged edges of corn husks if needed. Soak the husks in hot water for about an hour to soften. Weigh them down in the water with a heavy plate so they stay submerged. When soft, rinse them well and put back into a pot of clean water. Meanwhile, make the meat filling. Cut the meat into chunks (like for beef stew). Heat the lard or shortening in a large, heavy pot and brown the meat. When brown, add enough water to cover the meat and add the onions and garlic. Simmer until the meat is fork tender, about 2 to 3 hours. Remove meat from broth, reserving broth. Let the meat cool. Shred the meat .
In a heavy skillet, melt 2 tablespoons of shortening or lard (lard is traditional). Add the chili powder and cumin, stir for a few seconds. Add the meat and cook for two or three minutes. Stir over low heat until well blended. Add the reserved broth and simmer until the liquid lis reduced. The mixture should be slightly soupy. Set aside to cool while you make the dough (masa).
To make the dough (masa)
Drain the corn husks from the water, and spread on a clean towel to dry. Meanwhile, in a large bowl combine the masa harina with the baking powder. Add 3 cups warm chicken broth to the mixture a little at a time. Beat with a wooden spoon or mix with your hands until the dough is smooth and moist. Use a little more broth if necessary, but the mixture should not be loose. Beat the lard or shortening with a stand or hand mixer on medium speed about 3 minutes, until fluffy. Begin adding the masa dough mixture, a cup at a time. Scrape down the sides of the bowl with a rubber spatula as needed. If the mixture becomes too stiff to beat, add up to 1 cup of tepid chicken broth, a little at a time. When done, the mixture should be very light and delicate, similar to cake frosting.
Tamale assembly
Spread approximately 1-1/2 tablespoons or more of masa in the center of the smooth side of a dry corn husk. If the masa is sticky, wet your hands. Add about a tablespoon of meat filling on top of the masa.
Roll the husk so that the filling is enclosed within the masa. Don't worry if the filling is not perfectly surrounded by masa. When the masa cooks it will become firm and the tamale will be fine. Fold over each end of the corn husk. If the husks are very thick, you may find it difficult to fold the large end and get it to stay. If this is the case, don't worry about folding the large end and put that end up when you put the tamales into the steamer. In the steamer, stand the tamales vertically, open end up. Cover with a corn husk to absorb the steam. Add boiling water to a level of two inches. Cover tightly and bring to a low boil. Keep the heat to a simmer. Cook for 2 to 3 hours or until husks pull away from filling. After 2 hours, pull out a tamale, let it cool and then unroll the husk. The tamale should be soft, but firm not mushy.