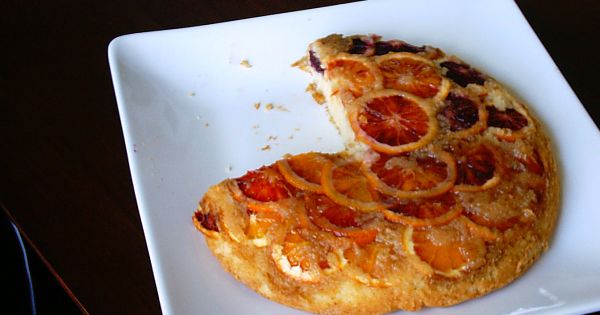 Wintertime in Southern California means lots and lots of citrus, and that means lots and lots of citrus recipes. This is a sophisticated dessert; light and not too sweet, with a nice orange aroma and good color. But it's also slightly bitter, due to the orange pith, and the cake texture is somewhere between a sponge cake and cornbread. Intrigued? It's not a dessert for the kids, but for your adventurous foodie friends. Good with coffee or tea, as breakfast, an afternoon snack, or following a light dinner.

1. Preheat the oven to 350. In the ovenproof skillet, combine the 6 tbsp sugar and water over medium heat, stirring. Once dissolved, turn up the heat and boil until the syrup turns golden amber in color - NOT DARK AMBER - about 5 minutes, maybe less. While this is happening, DO NOT STIR, but swirl occasionally, and if sugar crystals start to form on the sides of the skillet, brush them down with a clean pastry brush dipped in cold water. Once you've reached golden amber, pull the skillet from the heat and whisk in the 2 tbsp butter.

2. Slice the oranges into very thin rounds, maybe one-eight of an inch thick. Arrange them in the skillet, making rings, overlapping slightly, until the entire bottom and parts of the sides are covered.

3. Whisk the flour, polenta, baking powder and salt in a bowl to combine. In a stand mixer, cream the 3/4 cup sugar, 6 tbsp butter, and vanilla until light and fluffy. Add the egg yolks, one at a time, thoroughly mixing in each. From here, add the flour mixture and the milk in batches, alternating between the two, until just combined.

4. In a medium bowl (metal or glass), whip the egg whites until soft peaks form - about two minutes or so. Sprinkle in the remaining 1 tbsp sugar and continue whipping until stiff peaks form, and the egg whites look glossy but not dry. Scoop about a third of the egg whites into the batter and fold to lighten. Then fold the remaining egg whites into the batter GENTLY in two batches. Drop the now-complete batter onto the orange slices in the skillet in spoonfuls (the batter is thick, so be gentle so as not to mess the design of the oranges), and once it's all in, spread it evenly across the skillet.

4. Bake for about 45 minutes, or until a toothpick goes in and comes out clean. Pull the skillet out and let it cool on a rack for 10 minutes. Once it's cooled a bit, run a knife or spatula around the rim of the cake to loosen. Invert a cutting board or serving platter over the skillet then - WITH MITTS, THIS THING IS STILL HOT - hold the skillet and platter together and flip. Let the cake naturally settle onto the platter before pulling the skillet off. If the orange slices have shifted, now's the time to readjust them. Let this cool completely before slicing and serving.

NOTES: The syrup/caramel portion can be tricky, especially if you've never done it before. You don't want to stir while the syrup is boiling, because putting a spoon in there can introduce a stray sugar particle, which will cause the whole thing to seize up. Just swirl. Once you pull the skillet from the heat and whisk in the butter, the caramel may clump up quickly. This is okay - it'll smooth out again once it goes into the oven. Just try to get the clumps evenly distributed around the bottom of the skillet.

The egg whites can also be daunting, but this isn't a souffle, so there's no need to be extra careful. We're just looking for a little extra lift, since the cornmeal can be heavy. But do fold the egg whites in - if you stir, you'll destroy most of the air bubbles and that will defeat the purpose. I have not tried making this recipe while keeping the eggs whole. I suppose it would come out okay, but the resulting cake would probably be pretty dense.

Blood oranges have a great smell and a really vibrant color, so they're perfect for this cake. You could probably use other oranges, but I don't think the effect would be as great. Because the cake is so neutral in flavor and the topping is both sweet and sour, serve this with some kind of dairy topping - maybe some sweetened creme fraiche or a scoop of vanilla ice cream.