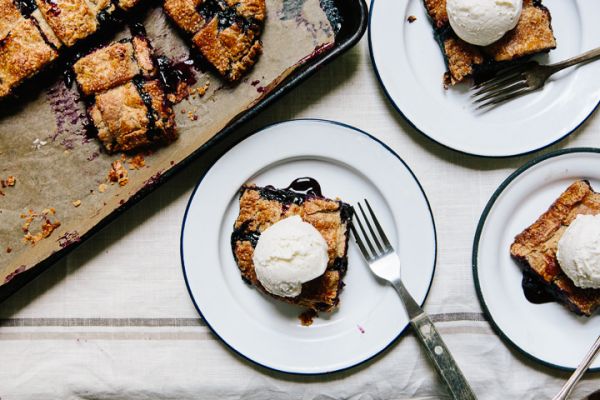 Blueberries are tucked into a wholesome rye crust to make this delicious pie for a crowd. I don’t mind if my pies are big, juicy messes so I gave this slab pie a lattice top. For a less juicy mess; roll out the second crust, lay it over the berries and fold the bottom edge up over the top and seal well by pressing firmly with the tines of a fork.

To make the crust, combine the flours and salt in a bowl.

Add the apple cider vinegar to the water and make a well in the center of the flour mixture.

Use a gentle hand or wooden spoon to mix about 8 tablespoons of water into the flour until just combined. If the dough seems very dry, add more water a couple of teaspoons at a time. You have added enough water when you can pick up a handful of the dough and squeeze it together without it falling apart.

Press the dough together, then split it in half, form into discs, and wrap each disc in plastic wrap.

Chill the dough for at least one hour before using, or overnight.

Preheat oven to 400º F and line a baking sheet with parchment paper.

On a lightly floured surface, roll out one piece of the dough into a roughly 8- by 12-inch rectangle, 1/4 to 1/8 inch thick.

Gently move the dough to the prepared baking sheet and put the whole thing in the fridge.

Roll out the other piece of dough to roughly the same size, erring larger rather than smaller, and set it aside for a moment.

Remove the dough from the fridge and pour the blueberry mixture on top, leaving a generous border of at least 1 1/2 inches around the edges.

Fold the bottom crust up and over the top of the pie and press firmly with a fork to seal.

Alternately, do not cut the remaining dough into strips, but rather lay it over the blueberry filling in one piece, fold the bottom crust up over the top and seal the edges very well by pressing firmly with the tines of a fork, cut a few vents in the top and proceed with the recipe as follows.

Put the baking sheet into the refrigerator or freezer until the crust is very firm. When you are ready to bake, brush the top of the pie with a beaten egg and generously sprinkle it with sugar.

Bake the pie until the crust is deep golden brown and the juices are bubbling, 35 to 45 minutes.

Cool slightly before cutting into squares and serving with ice cream or whipped cream.

Note: Be prepared; a lattice-topped pie will probably leak, so do not forget to line your pan with parchment paper.