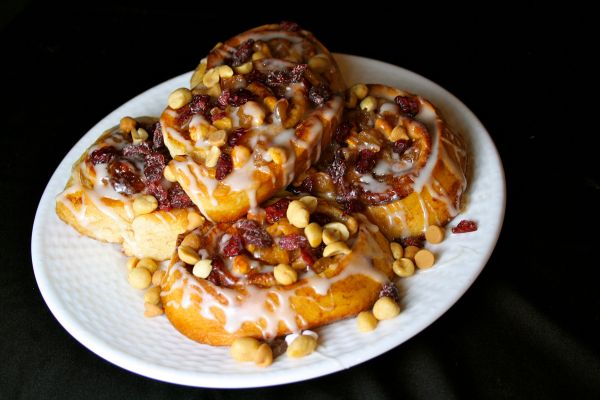 On October 9th, 2012, Tropical Foods had its Flavors of the Fall Recipe Contest with the culinary students at the Charlotte Campus of Johnson & Wales University. This recipe, Bon “Apple” Tite Cinnamon Rolls, was created by Rachel Dobrzykowski.

Melt butter in a saucepan and add in the apples.

Simmer and cook until soft, about 15 minutes.

Remove from heat and cool.

Melt the caramel syrup in a saucepan over low heat.

Stir the chopped peanuts into the caramel syrup and remove from heat.

Take cinnamon buns out of can and unroll each one on a cutting board.

Mix the apples and peanuts together and place small teaspoon portion inside of the cinnamon roll, carefully rolling it back together as you go.

Place the juice from the sautéed apples on the bottom of a greased 13x9 inch pan.

Take the cinnamon rolls and place them upside down in the pan. Put the rolls in the oven and bake them for 35 minutes or until dough is baked through fully. Take rolls out and immediately flip them on to another plate. Allow rolls to cool for 10 minutes.

Take the icing from the cinnamon rolls package and melt it for 10 seconds in a microwave. Using a fork, drizzle it over the top of each roll.