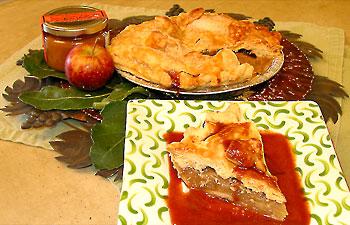 For crust: combine flour, salt and sugar in a large mixing bowl. Cut the butter into chucks and add to the flour mixture. Cut in with a pastry blender or two table knives until mixture begins to resemble coarse meal, then add frozen shortening and continue cutting in until the mixture is uniform in texture, like coarse meal.

Add ice water a sprinkling at a time; blend into the flour mixture with a fork until it comes together in a single mass without being wet or sticky. Test a small piece: if it crumbles, sprinkle on and blend in a bit more water.

Divide the dough evenly, and turn each portion of dough out onto a piece of plastic wrap. Press each portion into a round, flat circle (this makes rolling out easier than if it's chilled as a ball). Wrap each disc in plastic and chill, at least one hour.

Preheat the oven to 400°F and position the rack in the middle of the oven. Lightly butter a pie tin. On a lightly-floured board, roll out one of the discs to a 1/8" thickness, making it 1/2" in diameter wider than your pie tin. Transfer the circle into the pie tin and press to conform to the bottom and sides. Cover with plastic and refrigerate until needed.

For the filling: peel and slice apples. Place fruit in a large bowl. In a small bowl, stir together salt, sugar, cinnamon, ginger, cloves and flour. Add this mixture to the sliced apples and toss to coat evenly. Transfer the apples into the bottom pastry; the apples will be piled very high. Drizzle with caramel sauce and dot with butter, then set aside.

On a lightly-floured board, roll out the second disc to 1/8" thickness, wide enough to cover the apples and overlap the pie tin. Cut steam vents in the dough, and transfer to the top of the pie, sealing it to the bottom crust by crimpling the edges.

Brush the crust with melted butter or milk, and sprinkle with raw or white granulated sugar. If you're using butter, cover the crust loosely with foil until the last ten minutes of baking time to prevent over-browning.