By CHEF the Film
Member since 2014 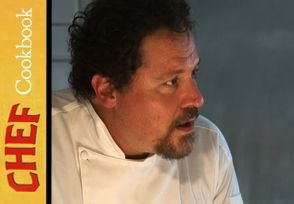 Food, fatherhood and fame were a recipe for disaster for Carl Casper, our hotshot L.A. chef who’s burnt out and tired of compromise in the kitchen. After waging a war on Twitter with an influential restaurant critic, Carl’s life takes a dramatic turn that forces him to start over rediscover why he became a chef in the first place.

The following recipe for Mojo Pork Cubanos helped Carl turn a dilapidated taco truck into a gastronomic sensation on wheels. This delectable Cuban-inspired variation on the classic ham and cheese sandwich got its start in Florida, where Carl renews his culinary career and life journey. Check out the recipe and the film to taste/see for yourself!

This is an official recipe created for and made in the film "CHEF" by Chef Roy Choi.

Heat a large cast-iron griddle or panini press. Add the ham slices to the griddle and cook over moderate heat, turning once, until browned in spots, about 1 minute. Transfer ham to a plate.