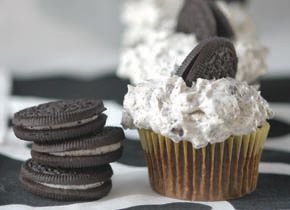 Eventhough I am not vegan, I LURVE vegan pasteries and desserts. I find the moistness just ridiculously delicious and the texture out of this world. The first time I attempted to do vegan cooking, it came out so so horrible. I was moritified because well, I was suppose to bring my little brick cupcakes to a potluck which meant I had to do a run to Whole Foods. After the party, I wanted to figure out what I was doing wrong and my happily baking vegan sister lived thousands of miles away from me. After doing some research online, I found this recipe from CHOW and it seriously was some of the best vegan cupcakes I ever had. Here's the recipe:

Preheat oven to 350°F and line a muffin pan with paper or foil liners.

Whisk together the soy milk and vinegar in a large bowl, and set aside for a few minutes to curdle. Add the sugar, oil, vanilla extract, and other extract, if using, to the soy milk mixture and beat until foamy. In a separate bowl, sift together the flour, cocoa powder, baking soda, baking powder, and salt. Add in two batches to wet ingredients and beat until no large lumps remain (a few tiny lumps are OK).

Pour into liners, filling 3/4 of the way. Bake 18 to 20 minutes, until a toothpick inserted into the center comes out clean. Transfer to a cooling rack and let cool completely.

I hope you enjoy!