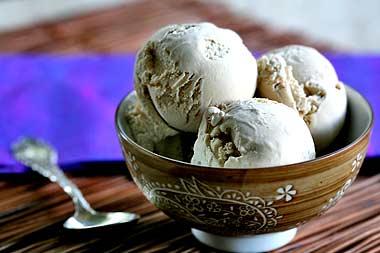 Into a heavy saucepan put the 1 cup of milk, 1 cup of the cream and the chai spices - star anise, cloves, allspice, cinnamon sticks, white peppercorns, and cardamom pods, and a pinch of salt.

Heat the mixture until steamy (not boiling) and hot to the touch.

Remove from heat, cover, and let stand for 1 hour.

Reheat the mixture until steamy hot again (again not boiling), add the black tea leaves, remove from the heat, stir in the tea and let seep for 10 minutes.

Use a fine mesh strainer to strain out the tea and spices, pouring the infused milk cream mixture into a separate bowl.

Return the milk cream mixture back to the heavy bottomed saucepan.

Add the sugar to the milk cream mixture and heat, stirring, until the sugar is fully dissolved.

While the tea is infusing, prepare the remaining 1 cup of cream over an ice bath.

Pour the cream into a medium size metal bowl, set in ice water (with lots of ice) over a larger bowl.

Set a mesh strainer on top of the bowls. Set aside.

Whisk the egg yolks in a medium sized bowl. Slowly pour the heated milk cream mixture into the egg yolks, whisking constantly so that the egg yolks are tempered by the warm mixture, but not cooked by it.

Scrape the warmed egg yolks back into the saucepan.

Return the saucepan to the stove, stirring the mixture constantly over medium heat with a wooden spoon, scraping the bottom as you stir, until the mixture thickens and coats the spoon so that you can run your finger across the coating and have the coating not run.

This can take about 10 minutes.

The minute this happens the mixture should be removed from heat immediately, and poured through the sieve over the ice bath to stop the cooking.

Pour the custard through the strainer and stir into the cold cream to stop the cooking.

7 Once initially chilled in the ice bath, chill the mixture thoroughly in the refrigerator (at least a couple of hours). Freeze the mixture in your ice cream maker according to the manufacturer's instructions.

8 Store in an airtight container in your freezer for several hours before eating. Note that the ice cream will be quite soft coming out of the ice cream maker. It will continue harden in your freezer. If stored for more than a day, you may need to let it sit for a few minutes to soften before attempting to scoop it.