By nichole
Member since 2007 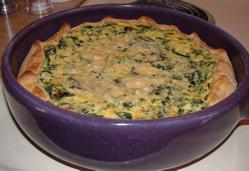 Place the spinach in a large pot with a cover. Cover and heat the spinach over a medium flame and steam, using the water clinging to the leaves, for 5 minutes, or until wilted.

Use tongs to press out all liquid from the spinach, chop spinach finely and add to the egg mixture. Stir well. Spoon the mixture into the pie crust. Bake for about 25 minutes, or until the center is firm and the top golden.

Remove from oven and cool slightly before serving.