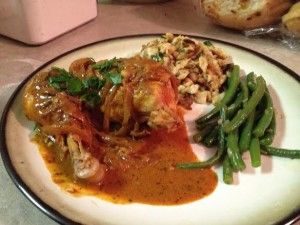 In a large non-reactive container, fully submerge the Chicken pieces in the Brine (recipe follows). Cover and let sit in the refrigerator for 45 minutes.

Once 45 minutes are up, take the chicken pieces out of the brine and pat dry with paper towels. Combine the Flour, 2 tbsp. of the Paprika, Smoked Paprika, Ground White Pepper and 1/2 tsp. of the Sea Salt in a bowl and mix well. Dredge the brined chicken pieces in the paprika mixture until they are very well coated.

In a large heavy-bottomed saute pan or even a cast-iron dutch oven, cover the bottom well with Grapeseed Oil and heat over medium-high heat just until the oil begins to shimmer. Take the well-coated chicken pieces and carefully place them skin side down in the oil in a single layer.

After a few minutes when the chicken has a nice, deep golden brown color, turn the pieces over to get the same color on the opposite side. Keep your eye on the pot and check the chicken occasionally because the heat will be increasing the longer the chicken is in it and you run the risk of burning. While the thighs and wings will probably only need to be flipped once, the shape and size of the breasts and legs will probably be where you’ll have to sear the other sides to be golden brown as well. As each piece becomes fully golden brown, take out of the pot and set aside. Don’t worry, because of the paprika, there will be some slightly darker than golden spots (never say burnt!).

Once all the chicken is fully seared, golden brown and set aside out of the pot, drain any excess oil and fat from the pot so that the remaining oil is just coating the bottom. Turn the heat up to high and add the Onions to the pot. Season with a dash of salt and some Fresh Ground Black Pepper and saute the onions for a few minutes until they soften and become translucent. At this point, add the Garlic, then deglaze the pot with the Chicken Stock, making sure to scrape up all the brown bits that have accumulated at the bottom.

Add the Apple Cider Vinegar and the seared chicken pieces in a single layer, skin side up. Continuing over high heat, bring the pot up to the boil, then reduce the temperature to medium to medium-low, cover the pot and keep at a steady simmer for 30 minutes. Be sure to occasionally peek inside to make sure the liquid isn’t being reduced too much and nothing is scorching on the bottom.

Once the 30 minutes are up, remove the chicken from the pot, tent with aluminum foil and set aside to rest. Turn the heat back up to high on the pot and add the remaining tbsp. of Paprika and the Marjoram. Boil the stock and onions over high heat until it reduces by half. Once the stock is properly reduced, take the pot off the heat and mix in the Sour Cream and Butter until they are fully incorporated into the sauce. Pour the sauce over the chicken and serve.

In a large non-reactive container, fully dissolve the Salt and Brown Sugar in the Water. Cut the lemon in half, squeeze the juice into the brine and add the squeezed lemon halves. Use to brine all sorts of poultry and pork products.