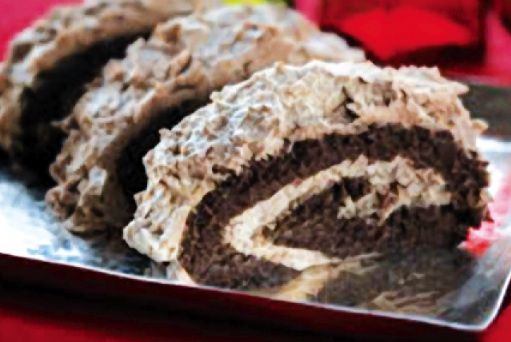 This simple festive roulade is light yet chocolaty. The flourless cake seems to melt into the cocoa whipped cream filling, which you can also customize with a little coffee, brandy, or rum, to taste.

Preheat the oven to 325 degrees F. Line the bottom of the pan with parchment paper. Grease the parchment paper and dust with a combination of cocoa powder and powdered sugar.

In an electric mixer with wire whisk attachment, beat the yolks with 1/2 cup of the granulated sugar and the vanilla until the mixture is very light and fluffy. Sift the cocoa over the egg yolk mixture and fold it in.

In a clean dry bowl with a clean dry whisk, beat the egg whites and cream of tartar until soft peaks form when the beaters are lifted. Slowly add the remaining 1/2 cup granulated sugar and continue beating until the egg whites are stiff but not dry.

Fold a quarter of the egg whites into the cocoa/yolk mixture to lighten it. Fold in the remaining egg whites. Scrape the batter into the prepared pan and spread it evenly. Bake for 30 minutes or until a cake tester comes out clean.

While the cake is baking, prepare a clean towel for rolling the cake. Sprinkle the towel with a mixture of cocoa powder and confectioner’s sugar. When you remove the cake from the oven, if the cake has not separated from the sides of the pan, use a sharp knife around the edges of the pan to release it. Immediately cover the top of the cake with the prepared towel, cocoa powder side down. Invert the pan so the cake rests on the towel. Remove the pan and carefully peel off the parchment paper.

Tuck the towel over one long edge of the cake and roll it into a jellyroll form. Let it sit to cool.

Whip the 2 cups of heavy cream in a bowl of an electric mixer with a wire whisk attachment. Slowly add the confectioner’s sugar and the cocoa powder. Continue whipping until the cream mixture is almost, but not quite, stiff. Be careful to not over whip.

Chill until ready to serve.