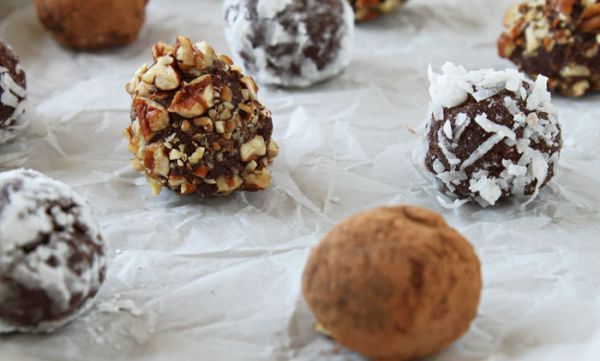 For the Potatoes Cooking Class - 113

Sounds crazy, I know. When I planned the menu for the "Potatoes" cooking class I thought it would be a stretch to do a potato dessert. Turns out it's not. After a few searches I found a recipe for potato truffle. I adjusted it slightly by adding almond extract just because it goes soooo good with chocolate truffles. The SdJ chefs were skeptical at first but after one taste they were believers!

Put the chocolate chips in a small bowl and melt them in the microwave at 50% power, or melt in the top of a double boiler over low heat, stirring often.

When the chips are completely melted stir in the mashed potatoes.

Add the vanilla and almond extracts and stir until thoroughly incorporated and until you can’t stir no more.

Place the mixture in the fridge to firm up, for 30 minutes.

Pour your topping mixture(s) into little bowls and have them ready. Take 1 tablespoon-sized hunks and roll between the palms of your hands and then roll in desired topping. Place in a container and refrigerate until firm. (They will keep in the refrigerator for about a week.)

*You can use leftover mashed potatoes, but don’t use ones that contain garlic, herbs, sour cream or a lot of seasonings. I used Russets that I boiled and mashed and added approximately 1/4 cup of heavy cream, a Tablespoon or two of butter and a pinch of salt.