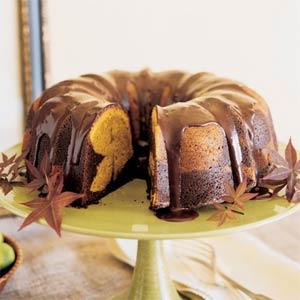 In a large bowl, with a mixer on medium speed, beat butter and sugar until well blended.

Add eggs, one at a time, beating well after each addition. Beat in vanilla.

Scrape half the mixture into another bowl.

Beat pumpkin into half the butter mixture until well blended.

Add flour mixture to pumpkin mixture and beat on low speed or fold in with a flexible spatula just until blended.

Add flour mixture alternately with the buttermilk to the other half of the butter mixture (starting and ending with flour mixture), beating after each addition just until blended.

Spoon half the pumpkin batter into a buttered and floured 12-cup bundt-cake pan.

Drop half the chocolate batter by spoonfuls over (but not entirely covering) the pumpkin batter.

Repeat to spoon remaining pumpkin and chocolate batters into pan.

Gently run the blade of a butter knife around the center of the pan several times, then draw the knife across the width of the pan in 10 to 12 places to swirl batters.

Bake in a 350° regular or 325° convection oven until a wood skewer inserted into center of cake comes out with a few moist crumbs attached, 55 to 60 minutes.

Let cake cool 10 minutes in pan, then invert onto a rack, lift off pan, and cool cake completely.

Pour warm chocolate glaze over the top of the cake, letting it drip down the sides.

Sprinkle glaze with peanuts if desired.

Let stand until glaze is set, about 2 hours, or chill about 30 minutes.

In a heatproof bowl or the top of a double boiler, combine chopped semisweet chocolate, whipping cream, butter, and corn syrup.

Bring an inch or two of water to a boil in a pan that the bowl can nest in or in bottom of double boiler, then remove from heat.

Place chocolate mixture over water and let stand, stirring occasionally, until melted and smooth, about 10 minutes.