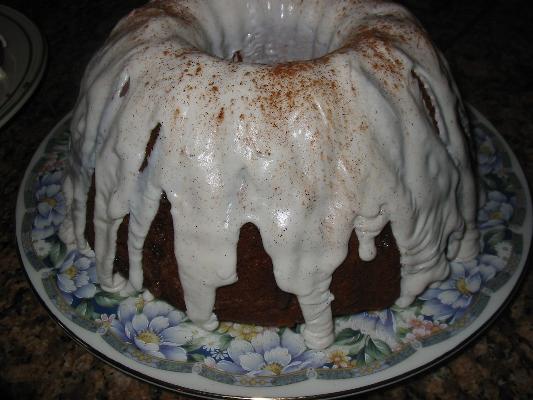 This an adaptation of a cupcake recipe from the Cake Mix Doctor -- I added a couple extra cinnamon-sugar infusions and was pretty pleased with how it turned out! Don't overcook -- it should be very moist and literally melt in your mouth!

After scraping sides of the bowl, increase mixer speed to medium and blend 1 1/2 to 2 min­utes more-- the batter will look thick but well combined.

4. Bake until cake is golden and fork comes out almost clean, about 30-32min.

5. Place pan on a cooling rack for at least 25min.

Melt butter on stovetop, stirring in the cinnamon and sugar until well-blended.

Pour overtop the cake evenly and allow to sink in and cool for at least one hour.

7. To prepare the frosting, simply stir the cinnamon into the frosting until well-mixed. Frost cake evenly, and enjoy!