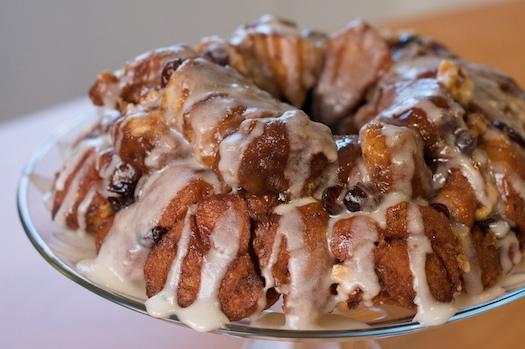 Warning! This is so incredibly bad for you, but tastes so ridiculously good that you aren’t even going to mind not being able to fit into your pants on Monday morning. I’ve made Monkey Bread quite a few times the traditional way — with refrigerated biscuit dough, but last weekend I got a very naughty idea. What if I followed the same basic premise but substituted cinnamon rolls for the biscuits? [Cue evil scientist laughter].

In large plastic food-storage bag, mix sugar and 1 teaspoon cinnamon. Separate dough into 16 rolls; cut each into quarters. Shake in bag to coat. Arrange in pan, adding walnuts and raisins among the biscuit pieces.

Bake 28 to 32 minutes or until golden brown and no longer doughy in center. Cool in pan 10 minutes. Turn upside down onto serving plate. Warm the packaged icing in the microwave briefly (20-30 seconds) and drizzle over the bread. Pull apart to serve. Serve warm.

Note: Can be reheated in the microwave the next day.