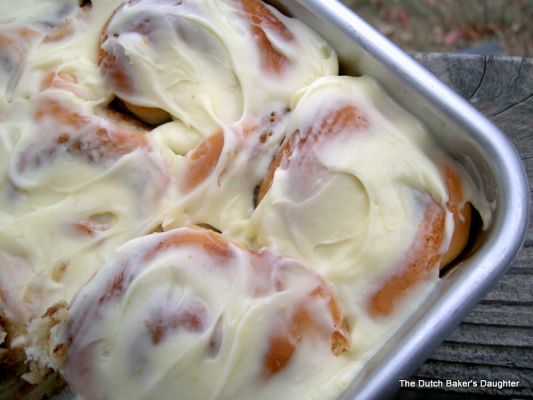 This recipe is adapted from several that I've tried over the years. Sometimes I glaze them with a simple powdered sugar glaze, but if I'm really lazy I just use a canned frosting. These are best eaten the same day, but in the unlikely chance that you have some leftover, just nuke them for a few seconds in the microwave.

Heat the milk, 1/4 cup butter and 1/4 cup sugar in a small saucepan until butter is melted and sugar is dissolved. Remove from heat. Let cool until temperature is about 110 degrees F (like bathwater warm).

In a large mixing bowl, combine milk mixture with yeast, egg, and 2 cups of the flour and the salt; beat well. Add the remaining flour, 1/2 cup at a time, stirring well after each addition. When the dough has just pulled together, turn it onto a lightly floured surface and knead until smooth, about 5 minutes. (Alternately, just use the dough hook on your mixer and let the mixer knead the dough for about five minutes)

Place the dough in a greased bowl and cover with a clean damp towel. Allow dough to rise until double, about 1 hour. In the mean time, in a small bowl, mix together the softened butter, brown sugar and cinnamon.

Roll out the dough into a 12X9 inch rectangle (I like to do this on my Silpat). Spread the dough with the cinnamon/sugar mixture. Sprinkle with pecans if desired. Roll up the dough and pinch seam to seal. Cut into 12 equal sized pieces and place into a greased 9X13 inch pan. Cover and let rise until doubled.

Bake at 375 degrees for 25 to 30 minutes or until browned. Remove from oven and frost while warm.

heterotechno
This is awesome! I used soymilk and half Earth Balance and it worked good!