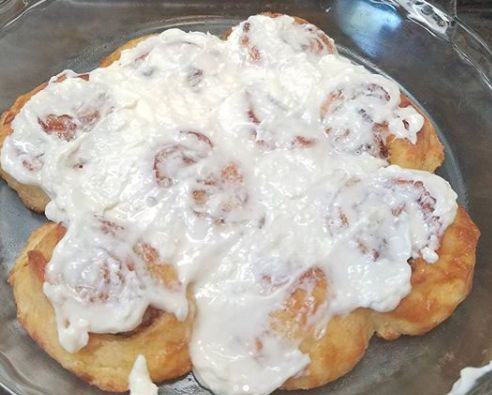 Recipe from i Save A to Z: Simple Living Lifestyle

Combine the mozzarella cheese and cream cheese in a microwave-safe bowl and cook it on high for about 1 minute.

After all the cheese is melted and stirred together, carefully stir in almond flour, baking powder, and egg until it is well-combined and smooth. This will cool down the dough a bit, too.

Dump the dough onto a sheet of parchment paper and begin to knead the dough until the egg is fully mixed in. The dough will be really sticky until you knead it together. You can sprinkle a little bit of almond flour on the dough to roll it out and prevent sticking, or add a splash of water to your hands (only).

Cover the dough with another piece of parchment paper and go over with a rolling pin into a rectangular shape.

Melt the 1/8 stick of butter and spread it over the rolled out dough.

Sprinkle cinnamon and sugar substitute onto the dough.

Roll the dough, starting at the base of one of the longer sides to the other longer side (bottom to top).

Use a piece of string (or unflavored floss) to cut the dough into (roughly) 15 different cinnamon rolls.

Place a piece of parchment paper in the bottom of your pan to line it before baking.

Place the rolls in the baking pan.

Set the oven to 350 and bake them for about 10 minutes, or until golden brown.

While the cinnamon rolls are baking in the oven, you can begin to mix the frosting.

Combine the heavy cream, cream cheese, and powdered sweetener into a bowl and mix with a mixer on high speed until the ingredients are all smooth.

Allow the cinnamon rolls to cool for about 5-10 minutes before applying the cream cheese frosting.