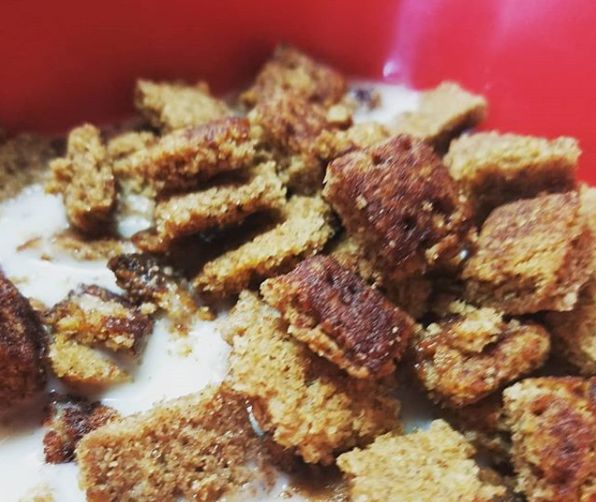 Add almond flour, cinnamon, baking soda, and salt to a medium bowl. Whisk until thoroughly combined and set aside.

Cream butter in a large bowl with an electric mixer for 2-3 minutes. Add in sweetener and continue to beat until thoroughly light and fluffy and much of the sweetener has dissolved.

With your mixture on low, add in half of your flour mixture, mixing until just incorporated. Mix in the rest.

Wrap cereal dough with cling film (saran wrap) and refrigerate for at least an hour, and up to 3 days.

Roll out the dough between two pieces of parchment paper until nice and thin. Using a ruler, cut dough lengthwise and then crosswise into squares. Prick each piece with a small fork. (I eyeball the size and use a pizza cutter - no ruler necessary).

Transfer parchment paper with the cereal to a baking sheet or tray and place in the freezer for 10 minutes prior to baking. The shaped dough can be frozen up to 3 months, and baked straight from the freezer (adding 2-3 minutes more to the baking time).

Bake for 8-12 minutes, until fully golden (depending on size and thickness). Keep an eye out for them, and note that if you like them crisp you'll want to push the baking time as much as possible (until deep golden).

Brush with melted butter and sprinkle with cinnamon "sugar." You can also do this prior to baking for a more "crusty" result. (I personally prefer doing this step last).

Allow to cool for 10 minutes before transferring to a cooling rack. Allow to cool completely, as they'll continue to crunch up (they take a few hours for the sweetener to harden up again).

Store in an airtight container for up to 5 days.