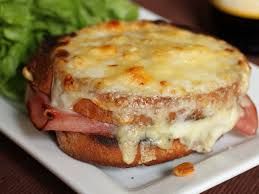 Adapted from the Classic Version of the Croque Monsieur

For the Gourmet Sandwiches Cooking Class - 107

LOVE the Croque! This sandwich dates back to Paris, 1910. It's simple: make a great Béchamel, use good bread, great cheese, and tasty ham. If you are counting calories, just move along now. This sandwich isn't for you.

Preheat the oven to 400. Brush one side of each slice of bread with melted butter and toast until lightly browned. Remove and set aside.

Make the Béchamel Sauce: In a small saucepan over medium heat, melt 2 Tablespoons of the butter. Add the flour and cook, stirring until combined and lightly golden, about 2 minutes. Slowly whisk in the milk. Cook; whisking, until mixture simmers and thickens; about 2-3 minutes. Add 1/2 cup of the cheese, nutmeg, salt and pepper and whisk until melted. Remove from heat, Set aside.

Preheat oven to Broil. Rewarm the Béchamel. Spread mustard on the untoasted side of 4 of the pieces of bread. Top those 4 slices with 3 oz. ham and about 1/4 cup of the cheese and the other piece of bread. Top each sandwich with 1/4 cup of the Béchamel (making sure to cover the edges) and the remaining 1/4 cup of cheese. Put in the oven and broil until brown and bubbly and cheese has melted.