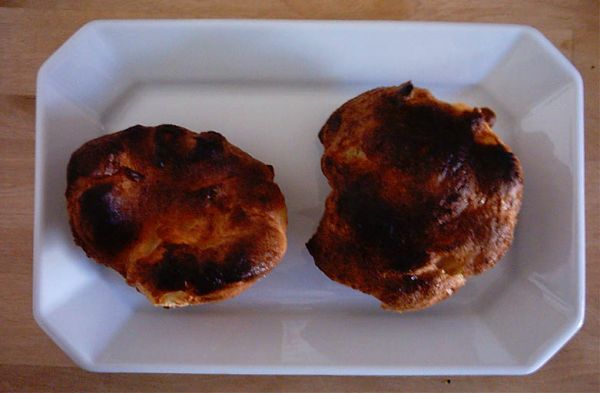 These are the new-world version of England's Yorkshire puddings. Made with what is essentially a crepe batter, they are far easier to make than people think, all puffy and crispy and golden with a light fluffy interior. The recipe is more or less the same no matter the source, but I do put my own little spin on it. We don't make popovers enough in America.

Whisk the eggs and milk in a large bowl until combined. Stir in the salt and flour until just combined - the mixture will still be lumpy at this point, but that's okay. You don't want to overmix. Melt 1 tbsp bacon fat; add this to the batter and whisk until thoroughly combined and the batter gets a little bit frothy and most of the lumps are worked out. Set the batter aside and let it rest at room temperature for 30 minutes.

While the batter is resting, measure out about 1/2 tsp of bacon fat into each cup of the popover tin OR into the outer 10 cups of a muffin tin (don't use the interior 2 cups on a muffin tin). Lower the oven rack to the middle-lower position, put the tin in the oven, and set the oven at 450 degrees.

Once the batter has rested, pour it into a measuring cup.

Now you have to quickly. Take the tin out of the oven (careful - there's hot grease sloshing around in those cups). Pour the batter into the cups, distributing the batter evenly. It's going to hiss and sputter a bit when the batter hits the hot fat. Put the tin back in the oven and let it bake for 20 minutes WITHOUT OPENING THE OVEN DOOR. NOT EVEN ONCE. After 20 minutes have passed, lower the oven to 350 degrees and let the popovers continue to cook for another 15-20 minutes, or until nicely golden brown and crispy. Try not to peek at them until at least the 15-minute mark.

Turn them out onto a wire rack (they should pop out of the tin very easily) and let them cool for a couple of minutes, just so you don't burn yourself. Then tear into them.

NOTES: The popovers rise because the extreme heat of the pre-heated pan and fat makes the batter souffle up. The sustained high heat of the oven keeps them there, until the batter can set. This is why it's so important not to open the oven door until at least 20 minutes have gone by. A dedicated popover tin will make very large popovers, but muffin tins work just fine - the result are just a little bit smaller. However, avoid using the inner two cups of a muffin tin for popovers - muffin pans are thin, and therefore the heat doesn't distribute evenly. Something like a muffin or a cupcake can handle this, but this batter is too delicate - the middle two just won't inflate properly.

Whenever I cook bacon, I strain the grease and reuse it - I love the flavor. If you don't have any, or don't feel like cooking up some bacon (for shame) or are *gasp* vegetarian, substitute 1 tbsp melted butter for the batter, and 1/2 tsp vegetable oil into each cup of the tin.

Some recipes call for cutting a small slit into the top of each popover as soon as they come out of the oven - ostensibly to allow steam to escape, so that the popover will not turn soggy and collapse in on itself. I've never really found this necessary, but if you prefer your popovers on the lightly-golden side, you might want to take this precaution. Popovers can be made ahead, cooled to room temperature, and then stored in zip-top bags. They will get soft, but all you need to do is re-crisp them in a moderate-low oven or toaster oven for a few minutes to bring them back. And if you're going to do that, before you re-crisp take a moment to make a small slit in the top, and then fill them with a little bit of cheese or jam or anything you like really.