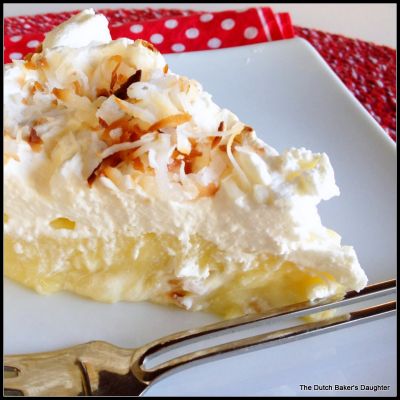 It's just better homemade, isn't it? To this recipe, I added some pecans and cinnamon to the crust to jazz it up a little. Make it for mom.

Place graham crackers and pecans in blender or food processor and pulse chop until mixture is fine. Stir in sugar and cinnamon. Add melted butter and mix until incorporated.

In medium saucepan, whisk together the flour or cornstarch and the sugar. Slowly add the milk, whisking constantly to avoid lumps. Heat over medium heat until mixture starts to thicken and bubble. Beat 1 cup of the pudding into the egg yolks and then add the yolks to the pudding in the pan. Continue to cook for an additional 1 to 2 minutes. Remove from heat and stir in butter, vanilla, and coconut. Pour coconut pudding into the cooled crust, place plastic wrap on top of the pudding and chill for several hours.

Place 1 tablespoon coconut on a non-stick piece of foil and put in toaster oven. Bake at 350 degrees for 1-2 minutes or until golden brown (watch carefully--it can burn quickly). Set aside.

pattit
I am sooooo hungry for a coconut cream pie and this sounds like the best recipe I have found. I hate the ones that have a meringue topping. Thanks for a great recipe.
fatima48
im so making this yummmm