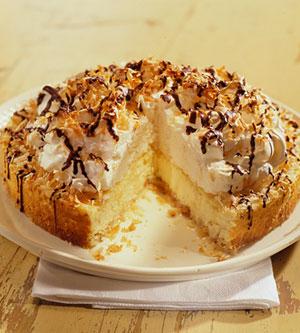 Everybody will want a slice of this wonderful cake.

Preheat oven to 350 degree F. For crust, combine 1 cup of the toasted coconut, the ground almonds, and melted butter or margarine in a small mixing bowl. Press mixture onto the bottom of a 9-inch springform pan; set aside. For filling, beat cream cheese, the 1/2 cup sugar, and amaretto or almond extract in a large mixing bowl with an electric mixer on low speed until smooth. Add the three whole eggs all at once. Beat on low speed just until combined. Do not overbeat. Pour filling into crust-lined pan. Place the pan on a shallow baking pan in the preheated oven.Bake in the preheated oven for 40 minutes. (Cheesecake will not be completely done.) Sprinkle with the remaining 2/3 cup toasted coconut.

Meanwhile, allow egg whites to stand at room temperature for 30 minutes. Combine egg whites, vanilla, and cream of tartar in a large mixing bowl. Beat with an electric mixer on high speed until soft peaks form (tips curl). Gradually beat in the 6 tablespoons sugar, about 1 tablespoon at a time. Beat on high speed about 4 minutes more or until mixture forms stiff, glossy peaks (tips stand straight) and sugar dissolves. Carefully spread or pipe using a star frosting tip over partially baked cheesecake to within 1 inch of the pan. Sprinkle with the 1/3 cup coconut. Return to oven and bake 12 to 15 minutes more or until lightly browned. Remove springform pan from baking pan. Cool cheesecake on a wire rack for 15 minutes. Loosen the sides of the cheesecake from the pan. Cool 30 minutes more. Remove sides of the springform pan and let cheesecake cool for 1 hour. Cover and chill at least 4 hours before serving. Just before serving, heat chocolate and shortening in a small saucepan over low heat until melted. Drizzle over cheesecake. Let stand until chocolate sets.

*Note: To toast the coconut, spread it in a single layer in a shallow baking pan. Bake in a 350 degree F oven for 5 to 10 minutes or until light brown. Watch it carefully, and stir it so it browns evenly.

pieman
LOoks great! SOrt of resembles a Lemon Meringue Pie in the picture. Albeit a messy meringue.