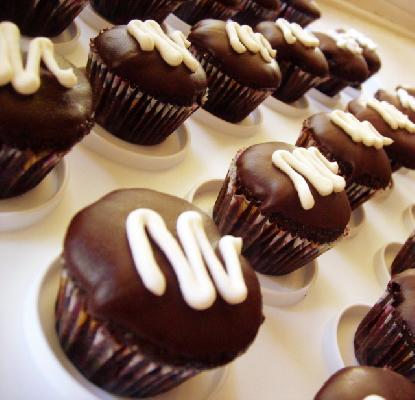 As the daughter of a baker I was rarely allowed to eat commercially prepared treats. I had to eat my favorite cream-filled cupcakes at my friends' homes. Unfortunately, I didn't appreciate my father's baking skills until after he was gone. I like to think that this recipe was inspired by him.

I have also used mini-muffin pans to make a smaller ( and much more adorable) version.

In large bowl, combine all of the cupcake ingredients and mix until well-blended. Fill each cupcake liner ¾ full and bake for 18 to 20 minutes or until cupcakes spring back to touch. Remove cupcakes from pans and allow to cool on wire racks.

In small pan, whisk 3 tablespoons flour with ¾ cup milk. Heat over medium heat, whisking constantly, until mixture is thick. Remove from heat and allow to cool to room temperature.

Fit a pastry bag with a #5 tip and fill with buttercream filling. Insert tip about 1/2 inch deep into the top of each cupcake and fill cupcake with buttercream. Set aside any unused filling.

In small saucepan, combine chocolate chips and ¼ cup butter. Over low heat, melt chocolate and butter, mixing together until melted and smooth.

carolyn
those look like the cupcakes i made with the low calorie suger from babs . they were real good.