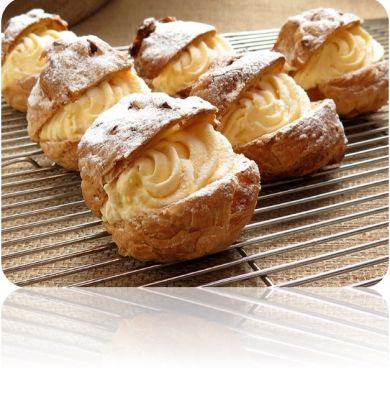 One thing I’ve learned in my quest to try as many recipes as humanly possible is that many of them are not as intimidating as they appear. Cream puffs, for example, seemed so complicated to prepare, but nothing could be further from the truth. I urge you to have a go at it; this cooking thing is so much fun!!

In a saucepan over medium heat, bring water and butter to a boil.

Add flour and salt all at once; stir until a smooth ball forms.

Remove from the heat; let stand for 5 minutes.

Add eggs, one at a time, beating well after each addition. Beat until smooth.

Drop by tablespoonful about 2 inches apart onto a greased baking sheet.

Remove to wire racks and immediately cut a slit in each for steam to escape; allow to cool.

Pipe filling into the puffs and the replace tops.

Refrigerate until ready to serve.