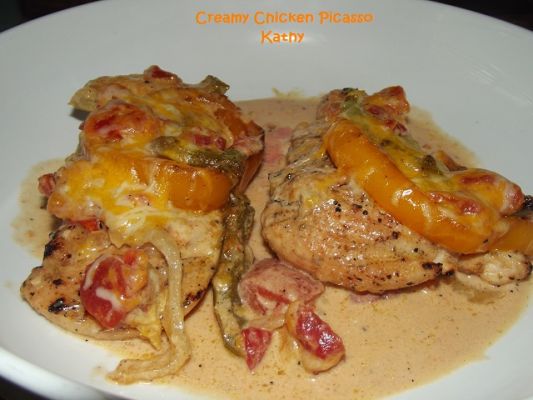 This is one seriously yummy chicken dish! OMGoodness, the creamy broth this makes is out of this world delicious especially with the crusty garlic bread I made for dipping! The blogger this recipe comes from suggested serving with pasta but I'm telling you the crusty bread is the way to go! I seasoned the chicken and then grilled it outside so I skipped the step of browning the chicken in a skillet! I continued on with the recipe after that step, adding butter and extra virgin olive oil to the skillet for the veggies! The chicken was so juicy with the taste of the peppers in every bite and the creamy tomato broth was fantastic! Love it! Awesome recipe!

I seasoned my chicken and then grilled it outside so I skipped the step of browing it in a skillet! I continued on with the recipe after that step by adding butter and extra virgin olive oil in the skillet for the veggies!

Pour the diced tomatoes, chicken broth and cream into the sauté pan with the garlic; season with salt, pepper and nutmeg. Simmer the sauce for 5 minutes, stirring occasionally, until slightly thickened. Pour the sauce over the chicken and vegetables. Cover the pan with foil and bake for 20-25 minutes in the preheated oven. Remove chicken from oven, and remove the foil. Sprinkle with cheese and return chicken to oven, uncovered, for another 10-15 minutes, until cheese is golden brown and chicken is cooked through.

Serve with pasta, if desired. I served with crusty garlic bread.