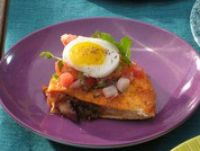 *Place potatoes in a medium pot of cold, salted water, bring to a boil and cook until fully cooked (about 15 to 20 minutes)

*Drain, let cool slightly, and grate on a grater using the large holes

*Heat 2 Tbsp oil or remaining bacon fat, in a large sauté pan over medium heat and add the onions, season with salt and pepper, and cook until golden brown and caramelized, stirring occasionally

*Preheat the oven to 425; place tortillas on a work surface and top with cheese, hash browns, and bacon

*Brush the tops with oil and sprinkle with the ancho powder

*Transfer the quesadillas to a large baking sheet and bake in the oven until golden brown and cheese has melted, approximately 8 to 10 minutes

*Remove from the oven, and cut each quesadilla into quarters

*Crack each egg into the pan; season with salt & pepper and cook until the white has set and the yolk is slightly firm; carefully flip over and continue cooking for another minute or so

*Top each quesadilla quarter with a fried egg and a few heaping tablespoons tomato relish and garnish with chopped chives; arrange on a platter