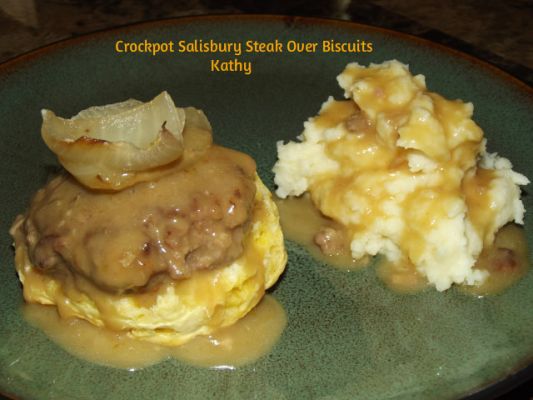 I came up with this recipe after finding a similar recipe on Allrecipes! The recipe on Allrecipes had 661 reviews both positive and negative! I read 11 pages of the 661 reviews and finally decided I would make it my way! Many of the reviews said recipe was to salty, they switched the cream of chicken soup to cream of mushroom, it fell apart in the crockpot so some used an electric skillet, some added mushrooms, some made it as is and so on and so on! Most everyone agreed it was delicious whatever way they made it! Many said the entire packets of dry onion soup and au jus was what made it salty so I nipped that concern in the bud right away and used 2 Tablespoons of each instead of the entire packets! I think it's very important to use the Panko Bread Crumbs because they are a thicker bread crumb and delicious I might add and they hold the patties together very well!

My family is cream of mushroom and plain old mushroom haters so this is why I liked this recipe with the cream of chicken! I love mushrooms but not really cream of mushroom! They will eat it in Green Bean Casserole but that's about it! The gravy in this dish is out of this world good and the salisbury steak is good too! I had a can of Grands Butter Tasting Biscuits that I needed to use up and they went perfect with this meal! My kids were dunking the extra biscuits in the gravy! Yum-O!

Using cooking spray, spray a large skillet over medium-high heat. Dredge the patties in flour just to coat, and quickly brown on both sides in the hot skillet. Sear them so they have a crunchy outside coating. This will hold them together in the crockpot. Drain on paper towels.

In a medium bowl, mix together the cream of chicken soup, au jus mix, and water. Mix well.

Add 1/2 of soup mixture into crockpot and place browned patties into the slow cooker, placing 1 patty in the middle and layer the remaining patties around it to where they are kind of standing up with the edge of the patties laying on the edge of the middle patty. This will help them to hold together and not become salisbury stew.

Pour remaining soup mixture over the meat and top with onions.

Cook on Low setting for 4 or 5 hours.

Serve over biscuits with a side of mashed potatoes.