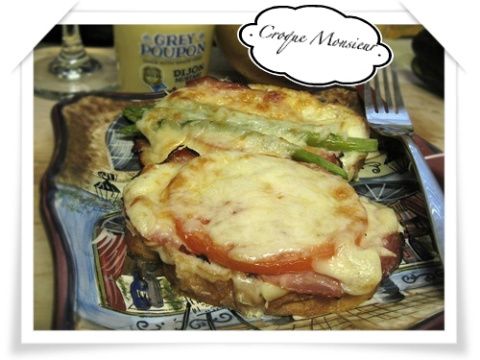 For the step by step photos visit my blog :http://sweetsins2share.blogspot.com/2010/08/croque-monsieur.html

Lately I have had a serious urge to try some new and exciting recipes... things that excite me and scare me a little. Going outside of my comfort zone and telling my self "you can do it!" pardon the water boy reference! So I decided to make Croque Monsieur, which also entails making Bechamel sauce! Now you might be asking yourself "What in the heck is Croque Monsieur?" Well I am going to tell you. Croque Monsieur is a French open-faced sandwich that is mostly served at bars or cafes as something quick. It is a toasted ham and cheese sandwich. The name is based on the verb croquer (to crunch) and the word monsieur (mister) When you combine that you get a sandwich called "Mr. Crunchy" well any toasted open faced sandwich that gets a Mr. in front of the word Crunchy is definitely something that I want to try I don't know about you! I decided to make my version of this the more elaborate way by coating the bread in a béchamel sauce as I mentioned earlier. Now if you are asking yourself "What the heck is Béchamel sauce?" don't worry because I am going to tell you! Béchamel is a white sauce; milk thickened with butter and flour roux. This sauce is one of the mother sauces of French cuisine and is also used in many Italian dishes. It is also very easy to make which is always fabulous news!

Now there are many ways to make this sauce and if you want a lot of options just google it! There is the most traditional way of an onion studded with cloves (that is how I will try it next time) but I opted for this simple recipe and it was wonderful.

Béchamel Sauce
1-quart whole milk
1/2-cup flour
1/2 cup or 1 stick sweet butter (unsalted butter)
Salt and pepper (You can use white or cayenne. White pepper would be more traditional)
1/2 Teaspoon Fresh Thyme (I had to omit this as there was none at my store and my sauce was still very good)

First you need to make the roux (pronounced row) Melt the butter on low when the foam disappears that is when it is time to add the flour. Whisk in the flour for 5 minutes until it is a blonde color and starts to bubble a little. This step is done to cook out the starchy taste of the flour and you can take this roux down to a deep brick color for some recipes but you want this to stay a blonde color. Once this has happened then add cold milk. I poured it in slowly while whisking. The key here is to make sure the milk is cold. Add in your spices and simmer for 10 minutes. The sauce will start to thicken. A little note I that once the sauce is at a simmer it will not get any thicker. You need to whisk to be sure that nothing on the bottom is burning but the simmer I really to cook in the flavors and thicken the sauce. The sauce is ready when it will coat the back of a spoon and hold a line. What it means to "hold a line" is that if you wipe your finger across the back of the spoon the line will stay so that you can still see the line it won't be runny and cover your line. I added about 1/8 teaspoon of cayenne pepper, 1/2 teaspoon of ground sea salt, 1/16 teaspoon nutmeg (I would have liked to use fresh ground nutmeg, however, I could not find that anywhere so I used the ground kind I had in my spice rack) The way I understand it is that you don’t want this sauce too over powered with spices because it is the "base" of the recipes it is used in and then you build on that! You can add cheese to it while it is still warm and melt that in. I choose to leave mine without and add it later to each recipe since the two recipes that I was using the sauce for called for different cheeses.

Once I made the sauce I placed it in a container and cooled it in the fridge. A couple hours later when we were closer to being ready to eat I prepared the sandwiches.

You will want to take your French bread loaf (preferably the nice round loaves however the long skinner versions will work as well your slices will just be slightly smaller) cut your slices of bread and place on a baking sheet. Try to keep them the same width so they will all cook in the same amount of time. Lightly coat the bread with EVOO (extra virgin olive oil) by drizzling it from above. Once that is done flip the bread over on the sheet so that now the bread with the oil is on the bottom. This is to help make your bread crunchy underneath while it cooks. Brush the tops of your bread slices with your béchamel sauce that you made. Make sure you get the sauce all the way to the edges of the bread to ensure that it does not burn. If the bread is coated to the edges it will not burn. I then placed some smoke cheddar and Swiss combination cheese on top of the sauce. Then you just layer it. I put the Ham on next. that is not entirely true! I forgot the ham and had to add it last because I just knew something looked off! Durr!! I swear!)

I then took tomato slices that I had salted and peppered and placed them on top of the ham. On a few I then put a few pieces of asparagus. Then you top it with some melty grated cheese like Fontina or Swiss. Grate just a tiny bit of fresh Parmesan over the top of the sandwiches. This gives another layer of flavor and you do not need much.

Lightly drizzle the tops with some EVOO and place in the oven at 400 for 15 to 20 minutes until the cheese I melted and browned. Jason and I were so thrilled with the way this turned out! I served it with a light salad with some home made ranch dressing and a nice white wine