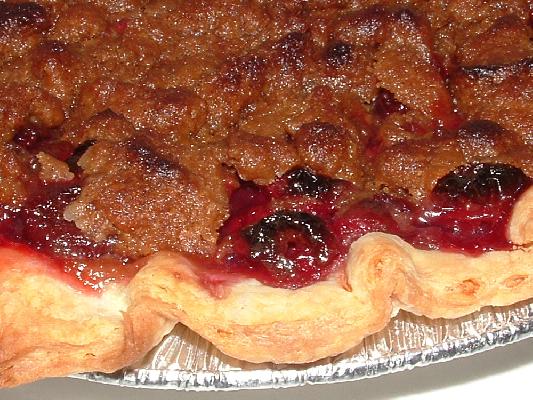 We bought a pail of cherries because my son (Dan) wanted to make cherry jam. But, the renovations have been keeping him busy so he has of yet not made the jam. He did decide to make a pie. He wanted it to have a crumb top; so I went looking for one he could use. I just found a few older cookbooks which I posted about already and found a crumb topping for him. He found the recipe on Martha Stewart's page.

Prepare pie crust: Put flour, salt, sugar in bowl. Add butter and use pastry blender to blend mixture until it resembles coarse meal. Add water a little at a time until mixture comes together. Divide dough in half and make into a discs. Wrap in plastic wrap and chill in frig for 1 hour.

On a slightly floured surface, roll one disk of dough into a 12" round about 1/8" thick. Line your pie shell with dough. Pour in Cherry filling. Then add Crumb topping.