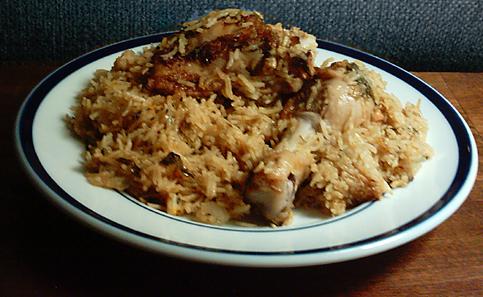 This is a variation of the tried-and-true arroz con pollo. This recipe makes use of some specific Latin American flavor components, though. Cumin makes just about any chicken dish taste better, I think. The idea came from a Bon Appetit recipe from 2007, but I wound up making it with items I already had - hence the variation. You could even make this without the rice - just saute, reduce the heat to low, add a tiny bit of stock, and let the chicken just braise - but I don't see why you wouldn't want the rice.

Mix first 11 ingredients in a zip-top bag. Pat the chicken pieces dry, place into the bag, and seal, removing as much air as possible. Massage the chicken briefly to fully coat with marinade. Place in a clean bowl and refrigerate, 4 hours or up to 1 day. Turn the chicken pieces from time to time to ensure it's all getting equal coverage in the marinade.

2. Cook bacon pieces in a heavy-bottomed pot over medium heat until crisp. Remove bacon with a slotted spoon to a paper towel-lined plate; spoon off all but 2 tbsp of the bacon fat. Let the pot heat up again, 30 seconds or so. Remove chicken from marinade, reserving as much marinade as possible. Place chicken skin-side down into the pan; let sit for six minutes, or until golden and crispy. Flip chicken pieces and repeat, another 4 minutes or so. Remove all chicken pieces to a clean plate; set aside.

3. Spoon off all but 1 tbsp of remaining fat. Saute onions in pot until soft and beginning to turn translucent, 5-7 minutes. Add garlic, jalapeno, and paprika and cook, stirring constantly, until garlic and paprika are fragrant, 30 seconds to 1 minute. Add rice and stir to coat and toast grains, about 2 minutes. Add chicken stock, saffron threads, and remaining marinade; stir to combine and to deglaze bottom of pot. Bring the mixture to a boil; return chicken pieces to pot, nestling them into the rice, and add any accumulated juices as well. Drop heat to low, cover, and let it simmer slowly for fifteen minutes or so.

4. Check at fifteen minutes, stirring to make sure nothing is burning. If you like your rice a bit moister, add more stock in 1/2 cupfuls, letting simmer for another ten minutes or so, checking constantly.

This is infinitely adaptable. Use chorizo or andouille sausage instead of the bacon. If you're one of those strange people who don't like bacon or sausage, just use olive oil. Throw in sliced bell pepper or pimientos. Use a bit of New Mexico chile powder. Even a splash of some dry Spanish sherry would go great. But definitely stick to chicken thighs; they're far less likely to dry out during cooking, and they just taste better.

Don't skip the toasting-the-rice step; it's just an extra minute or so, but it really helps bring out the strong nutty flavor of the rice; you'll notice a difference, even with all the chicken stock and spices. Saffron makes everything it touches more fragrant and exotic, but it's friggin' expensive, so I won't feel bad if you leave it out - the dish will still be mighty tasty.

And don't freak out because I poured the used chicken marinade into the rice. We bring the whole thing to a boil once it's combined before dropping to a simmer. So in the event that there happened to be a stray bacteria on the chicken (which there won't be because you trust your butcher and practice proper food safety) and that bacteria happens to withstand the acidity of the marinade (extremely unlikely), it will finally be rendered moot by the 212 degrees. So pour the marinade in - that's a whole bag of flavor, people

somecook
I've tried to make this tonight and suspect there is an error in the recipe. The marinade calls for a total of 4 Tbs of liquid for six (6) chicken thighs. That is barely enough liquid for four thighs, and certainly not enough for there to be any "remaining marinade" in step 3. Somehow the proportions are wrong.
cookie26
Great Cuban chicken recipe. I will try, as cumin is rather delicious with chicken, I agree!
There are some great food, Travel and fashion ideas in a Canadian magazine: