By CenturyLink
Member since 2013 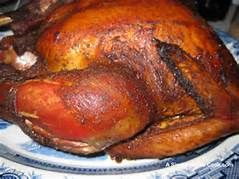 When I was in the Navy, I was stationed in Hawaii at a Naval Communications Master Station and living in Navy housing. I had bought a Web grill that summer. Around Thanksgiving, we brought a 12 lb turkey to cook for Thanksgiving Day. While preparing the turkey the day before Thanksgiving, I came upon an idea for barbecue turkey. Not wanting to cook in a hot kitchen, I suggested to my wife we try to barbecue the turkey, instead of cooking it in the oven. She liked the idea, as it would free up the oven for all the other cooking we needed to do. This turned out to be the best turkey we had ever had, and i have been cooking turkey over the barbecue every Thanksgiving, but two, (once I was deployed to the Persian Gulf, the other it rained too hard to barbecue, as I didn't have an enclosure for the 3rd Weber grill I had purchased). New friends seem really amazed how good it is.

12 to 20 lb turkey, depending how many you are having over for Thanksgiving. Anything bigger wont fit in the large Weber grill.
Your favorite dressing, enough to stuff the particular size turkey you are going to barbecue.
1 to 2 cups of chicken broth with 1 to 2 melted tbl spoons butter.

Heat up the Weber by placing 50 charcole briquettes in the grill, divided in half, placing one half on each side of the grill, set so they won't be directly over the turkey.

Between the briquettes, place a drip pan to catch all the turkey drippings.

Light the briquettes and wait until they are white before placing the turkey on the grill.

Prepare your turkey, by removing gizzards, liver and neck.

Using a liquied injector, inject half the chicken broth mixture into the breasts and thighs of the turkey.

Stuff the turkey with the stuffing, in the neck and rear cavities of the turkey.

Tie up the turkey with string and place on the grill. Cover the grill.

Every hour place 8 to 10 briquettes on each side to keep a steady temperature inside the grill.

Using a meat themonator, insert it into the breast as far as you can without touching bone, based on cooking time.

Once the temperature gets to 165 degree, the turkey is done.

Place the tureky on a serving platter or slicing board for 20 minutes.

Serve along with the rest of your family's Thanksgivng side dishes.

Cooking time depend on size of turkey, and whether the turkey is stuffed or not.