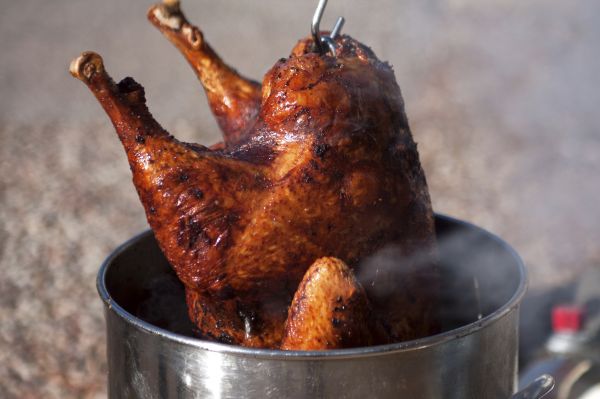 "And it makes a great sandwich the next day, too."

From our family to yours...

Prepare lard at medium heat, about 350 degrees (do not allow the lard to exceed more then 3/4 of the frying pan; the lard will rise when you put the turkey in)

Here’s a tip for measuring the right amount of lard: fill your pan with water to 3/4. Drop the fresh turkey into the water, to measure how high it would rise in the deep-frying pan. Remove the turkey and adjust the melted lard to that level, making sure it does not exceed the top of the pan or splatter over.

Preparing the turkey:
Make sure there are no feathers, metal or plastics on the bird.
Clean out the giblets from inside the bird and set aside for a great gravy, or to add to your stuffing
Stuff the celery, onions, garlic and apple inside the bird. Use large wooden picks to close the bird
Rub your spice mixture all over the outside of the turkey

Frying the turkey
The melted lard and pan will be very hot. Be cautious and use a large metal basket strainer to lower the prepared bird into the heated lard, neck down.
After carefully placing the bird into the heated pan, cover with a ventilated top and let fry for 1/2 hour; check the position of the bird and the level of the lard. Make sure to keep the lard a few inches below the top of the pan. Make sure the entire bird is submerged.
Maintain the temperature of the lard at 350 degrees F (175 degrees C), and cook the turkey for 3 1/2 minutes per pound. Lard works best because it can maintain its flavor in the highest heats and won’t smoke you out of your house and kitchen.

Allow for a cooking time of roughly 1 hour 45 minutes.

Carefully remove basket with the turkey from the hot lard; drain the turkey. Use a meat thermometer and insert it into the thickest part of the thigh.  The thermostat should read 180 degrees F (80 degrees C). If it doesn't, re-submerge the bird for another half hour. When the turkey reaches the desired temperature, finish draining it on the prepared platter.