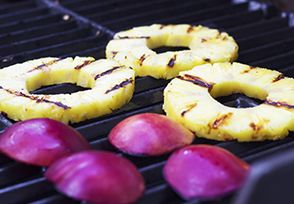 After we had been in France for about a year, we moved to a place with a nice garden and lots of room for a BBQ. I hadn't grilled on a BBQ for about 5 years, so I started basically trying to do everything on the grill. This was the first dessert I tried. So, so good!

Really is as simple as it sounds. Just cut the pineapple into about 1cm thick slices, the half the nectarines and remove the pit. Later, we did the same recipe with peaches (clingstone) which actually was just as good!

Grill the pineapple and nectarines just about 3 to 4 minutes on medium heat. You should turn the pineapple rings once during the grilling, but you don't need to touch the nectarines.

I served the pineapple and grilled nectarine together along with a mascarpone topping made by mixing the mascarpone cheese, icing sugar, cinnamon, and the seeds from the fresh vanilla bean. Break and crumble the meringue pieces over top.