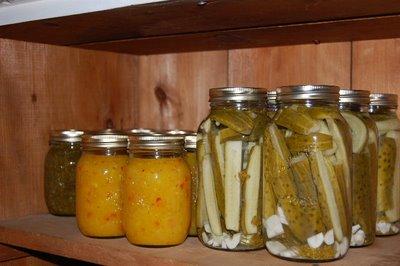 Well I was making the relish's I thought I might as well make some dill pickles. They are incredibly easy to make and fast too. You may notice that the image below shows 6 jars and the recipe makes 7. This is because one of the jars cracked when I put it in the canner to process, releasing its contents into the canner. Not that big of a deal though, I think it was because it was an older jar.

I chose to make dills that are packing into jars, then filled with a vinegar solution and left to pickle in the jars for about a month. There are many ways of doing dills, another way is showed over at Sinfonian's blog, Sinfonian's Square Foot Garden. He place the cucumbers in a crock w/ spices, then cover them with a vinegar solution and let them pickle in an open air environment. You can also make dills that are fermented in a water/spice/salt solution that take on a sour taste naturally. These are like the dills you find in the refrigerator aisle at the grocery store, here is a link to that recipe.

Now that we have had our daily preserving class, here is the recipe for the dills

Start by sterilizing your jars, I have started using the oven to sterilize the jars. This is done by placing cleaned jars in a cold oven on a sheet pan and then turn the oven to 225 for 20 minutes or until ready to use.

Once the jars are being sterilized put the canner on the stove and start bring it to a boil. Then place your sealer lids in a small pot, cover them with hot water and put on low heat to soften the rubber seal.

After that, add the vinegar, water & salt to a pot and bring to the boil. Well that is heating remove the flowers heads from the fresh dill and roughly chop the 14 clovers of garlic.

Now place a sealer lid on each jar and tighten the threaded lid until just tight. Then transfer them into the canner making sure the water is 1 inch above the jars. Boil for 10 minutes once the boil is reached.

Now transfer the jars to a t-towel to cool. Once cooled and sealed, they need to pickle for 3-4 weeks to take on the sour tastes. The hardest part, waiting.