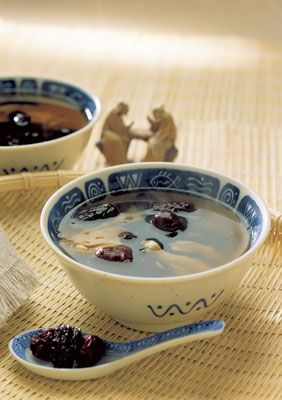 "Great tonic soup for women's bodies after their menstrual cycle"

Prepare this tonic soup and drink up to 1 cup a day for three to four consecutive days after a menstrual cycle, refrigerating the tonic between uses. It is said to rejuvenate the uterus, warm the female organs, and regulate menstrual flow; it is also drunk after childbirth and to treat menopause.

Some women’s bodies may be balanced without dong quai and, for them, the herb may be overstimulating. Dong quai can also be cooked with chicken broth, which supposedly triples the tonic’s blood-building quality while improving its flavor. This tonic should be taken in moderation, as too much can be overwarming to the body and can produce the opposite effect desired, or yeet hay symptoms.

Dong quai is sold in herb stores and some Chinese supermarkets. It is sold in ivory-colored knobs with fine brown veins; each knob is about 3/4 to 1 1/2 ounces. It is also sold in fat pear-shaped paper-thin slices, about 1/2 ounce each. The price can vary according to the quality; very ­ordinary quality can cost about $10 per pound. If you use dried red dates, the dates must be soaked and the pits ­removed; black dates only need to be rinsed. Sometimes I double steam the soup in individual portions, using the Chinese tureen with double lids to “contain” the aroma, as it can be strong.

1. In a 2 1/2 quart saucepan, combine the dong quai, dates, and cold water, and bring to a boil over high heat.
2. Cover, reduce heat to medium-low, and simmer about 3 hours, or until the soup has reduced to about 4 cups. Strain.

3. Drink piping hot (no more than 1 cup per person). For the very adventuresome, the dong quai can be eaten, but be warned—it has a very powerful flavor even after three hours of ­cooking.